When IM Mok Tze Meng brought his wards down south to compete in the Singapore Open 2010, he introduced me to a certain Lim Zhuo Ren, a nice polite chap who one week later, nearly mauled me on the chessboard during the Singapore Malaysia match. Thanks to perpetual check (and possibly the Pow Sing chicken rice treat I gave him earlier), I emerged barely intact. Just nearly two years down the road, Zhuo Ren proceeded to win the Malaysian Championships and then made the Olympiad team where he emerged their top scorer, notched up the FM title and made an IM norm in the process. Let me introduce to you, FM Lim Zhuo Ren. 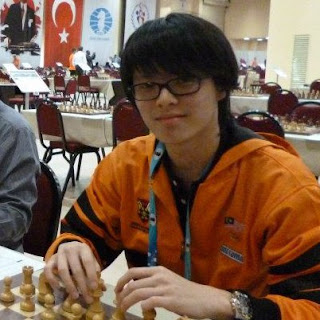 Hi! Zhuo Ren. Thanks for consenting to this interview.
Ok. Firstly, thanks for this opportunity. It feels weird being interviewed. This is my first time, so please bear with my rambling.
How did you pick up chess and when was that?
When I was about 7,  I saw my dad teaching my mum chess. Upon seeing this, I asked him to teach me the game. For about 2-3 yrs after that, I only played with my dad whenever he was free before I was taken and enrolled into a chess club where I met IM Mok. The rest is history.

Any comments on your chess style?
My chess style....don't really know my style. I like to be in control of the position, limiting my opponent's counterplay and squeezing him. But you can't always play a particular way every time. Sometimes, you have to play what the position demands. For example,  in a chaotic position full of tactical possibilities, you cannot limit counter play. You have to be able to calculate precisely and everything has to be concrete. I think in modern chess, you have to be ready to play any sort of position, to be universal and that is hard.

Is there any chess literature or software you will recommend to the aspiring junior who hopes to make the big league?
I think there are better sources to ask about this. I recommend Chessbase which everyone else would recommend. It's important to key in your games and to learn from your mistakes. One book that I was very fond of in my junior days was "Rethinking the chess pieces" by Andy Soltis. I read it many many times. It was recommended to me by IM Mok.

Prior to the Olympiad, what was your best result (best players you've beaten/drawn etc, best tourney performances)
My best result. To be honest, I don't know my best results in terms of rating performance prior to the Olympiad. So I will just tell you my 2 most memorable tournaments. One of them is National Championship 2011 which I won with 8/9 pts. If I'm not mistaken, I think my Rp was around 2400. Another one is Singapore Open 2010. I think I scored 6/9. I beat and drew with a lot of higher rated players there which included GM Laxman (we drew). I can't remember his rating at that time. It was also memorable coz I made many new friends there including you guys. XD. I remember our game during the Singapore-Malaysia match too, a nice draw (What nice game? Nice for you, not nice for me! You nearly wiped me off the board - Jr) and I remember playing blitz with Wei Ming too.

And how do you plan on achieving that?
I have a few books which have helped me tremendously this 1-2 months which I haven't finished. And I have some other materials (books) which I'm going to read while I juggle my studies. In short, I just plan to work hard. One of the people who inspired me to work hard is actually none other than Kevin himself :P

The Olympiad was probably the first event where you get to play against so many GMs/IMs at a go...What do you reckon is the difference between a GM and IM/FM?
I will tell you when I become a GM. LOL. That was a joke. Err, I'm not really sure what the difference is. A GM probably has more chess knowledge than an IM and he probably understands chess better. I guess the GM maybe knows more about what he is doing on the chess board and what he is trying to achieve on it and maybe that's why we get outplayed against them

What did you (and your team) feel  when you found out that your opponents were the Dutch comprising  ELO 2600+ type gms.  How did you guys approach the situation?
I think we were excited to play 2600 GMs. I know I was. It's not everyday you get to play such a strong team. I think we all prepared for our respective opponents except for IM Mok who prepares in his own special way. 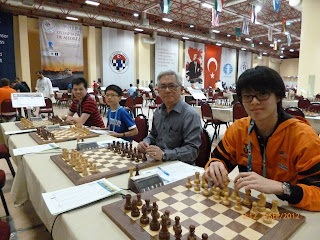 Did you intentionally go for imbalance in that game against GM Daniel Stellwagen?
I was going through his games and saw a variation of the Dragon which I liked. So I decided to try it out. I looked through the game notes,  variations and some analysis. During the game, he deviated early by not playing Bc4. I knew he probably wasn't familiar with this line since he normally plays Bc4 and I was familiar with some of the sacrifices on f3/g4 in the Dragon and decided to just go for it. I was quite sure he would just outplay me had I not complicated the game. Luckily, I got a draw. A lucky one for the sacrifice wasn't really sound, I think.

Were you inspired at Mok's performance at the start of the Olympiad?
Yes, of course I was inspired. I was inspired to fight especially the way he fought against Van Wely. I was really hoping he would make the GM norm. Unfortunately it was not to be. 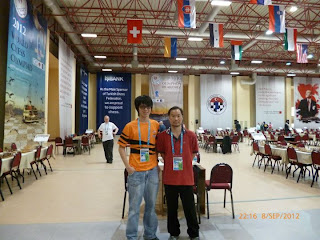 Zhuo Ren with IM Mok, giant-killer of ELO 2600+ GMs (with thanks to IM Jimmy Liew for this pic)

What was your target for the Olympiad? Did you expect to be in contention for the IM norm. At which point did you start aiming for it?
I didn't have any target. I just wanted to do my best and hope I get a decent result. I didn't expect to get an FM title, let alone a norm. I started thinking about the IM  norm when I made 5/7. But I was more focussed on securing the FM title first. Only after I did that, then I started really aiming for the norm.

What did you do during the 2 day interval before that critical game against the Thais?
I was preparing. Going through a book on the opening I was planning to play again. You could say I was over preparing. Mok, Li Tian and Jimmy helped me relax a bit by playing some games (not chess).
What was first thing you did after your opponent resigned thus ensuring your 13 game IM norm?
After my opponent resigned, I was actually kind of in disbelief at what had just happened as I signed the scoresheet. I looked at Jimmy's and Mok's games. Yee Weng had already finished and he was pumping both his fists. He shook my hand saying "You did it!" and only then it started to sink in. After I got out of the tournament hall, I got my mobile phone out and I texted my mum telling her the news. Then, we just waited for our teammates to finish before we left the venue.

Which is your favourite game from the Olympiad?
This is a hard question. The last game was special coz it secured the norm but I really liked my game against Columbia (vs FM Christian Camilo Rios (2398). I think that was my favourite. It was the game that secured the 6 points required for the FM title.


How did you celebrate your (and Malaysia's performance) success?
We (the men's team) had drinks at the hotel. Joking around, basically just enjoying each other's company.

Thank you for your time!
Thanks!