IM Luis Chiong and Napolean Recososa made a Pinoy 1-2 finish at the NUSS Open when they finished with 6/7, half point ahead of CM Olimpiu Urcan who drew Luis in the final round. CM Tan Weiliang put himself out of contention with losses to Luis and Napolean in Round 5 and 7 respectively after he had started with 4/4 after the following win.
Weiliang seems to be FM Tin Jingyao's bogeyman. Just watch the brilliant career of Weiliang's f pawn

However, Weiliang's chances were stymied when after fending off Luis' powerful queenside initiative which kept coming in waves, he missed a curious rook manouvre which won a pawn. Luis' finish was certainly classy.

The rest of IM Luis Chiong vs Tan Weiliang can be seen from sgchess.net in 967. Videos (81): Light-Squares Supremacy

Finally, the game which secured Luis the title (on tiebreak) and Olimpiu the 3rd prize. 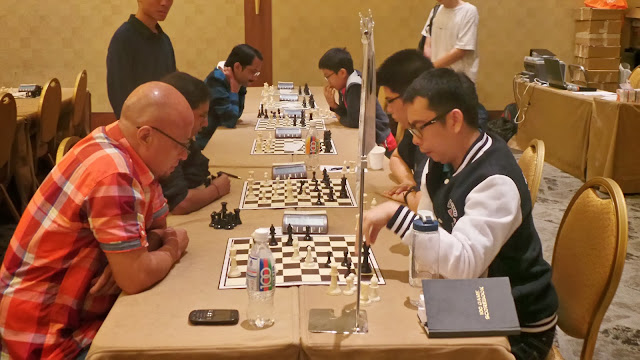 The NUSS Open Champion IM Luis Chiong in the left on the top board during the early rounds of the NUSS Open 2013 (Courtesy of sgchess.net)

Weiliang had also generously sent in the fully annotated notes of his loss to Napolean but I believe it will be a strong contender for Olimpiu's brilliancy cash prize game for October 2013,  so I'm going to wait and see if it turns up on Olimpiu's site first...
Posted by IM Kevin Goh at 02:07 No comments:

One mighty hack - by Junior Tay

Best blitz game I've seen for a while. White is obviously a fan of the Swede GM Ulf Andersson. But he doesn't get a chance to play the += endgame which Andersson is famous for winning.
Posted by IM Kevin Goh at 00:22 No comments: