The Remote Chess Academy (helmed by GM Igor Smirnov) and Chessbase has combined to hold a 13 round, 3 minute (with 2 second increment per move) blitz event on the Playchess.com server, in honour of the Anand-Carlsen World Championships match. The 30 main prizes and 18 more lucky-winner prizes proved to be a great draw as 366 participants started the event, with at least 5 GMs and 10 IMs taking part.

Wei Ming, Daniel Chan and your scribe all reached 8 points after 11 rounds. In round 12, I lost to Haapana from Finland (he had also beaten Daniel earlier). Wei Ming slowly but surely overcame Chinese IM Wang Shuai and Daniel took out Yozimar Hernandez of Mexico. In the final round, Wei Ming agreed to a 3 move draw with eventual champion GM Jose Carlos Ibarra Jerez -handle name Singapu(!) who scored 11 out of 13 for clear 1st. At the end of the event, I introduced myself as a Singaporean and asked him how he ended up with this handle name. He said he had always liked the place but at the age of 11, when he created the handle name, he did not know how to spell it! My best game of the tourney came in the final round.
Here is the game which allowed me to find the a3-f8 diagonal + back rank combination.
Daniel Chan was pitted against the very strong Russian GM Sergey Volkov (ELO 2615) and they fought tooth and nail to secure a high placing. At one point, Daniel rode his luck as Volkov missed a mating idea but after that, Daniel pounced upon a dubious winning attempt by the Russian to clinch the point. Hence, Daniel finished an impressive 6th (10 out of 13 pts) winning US$150 worth of RCA products, while Wei Ming's 12th position (9.5 out of 13) earned him Deep Fritz 14 . My 19th place (9 out of 13) got me 6 months premium membership at Playchess.com.

Here's a nice positional lesson by Wei Ming where he kept improving his knight placement until his opponent's position became untenable. Final Scoretable - RCA Open 2013
Posted by IM Kevin Goh at 22:38 No comments:

A clash of champions - by Junior Tay

The recently concluded World Championships won by GM Magnus Carlsen had English GM Nigel Short tweeting about the 'end of an era', signifying that the new generation has finally taken out the old guard.

Unfortunately, chess strength deteriorates as one ages, some exponentially, some in lesser degree. At the highest level, the slightest inaccuracy, as demonstrated by Carlsen, is ruthlessly pounced on, just like Vishy waning in the 5th hour of the games and Magnus forcefully exploiting this in the endgame.

In the local context, it is intriguing to see IM Leslie Leow making a comeback by representing Singapore in the Malaysia-Singapore match held today at KL.  Leslie, the 1979 and 1984 National Champion,  last represented Singapore in the 1992 Manila Olympiad and has not competed for more than 20 years! It would be interesting to see if he can cope with Malaysia's best. Whatever the case, it is great that a former local chess giant is coming back to chess, and hopefully, Leslie can dish out lessons to our young punks on the local circuit.

In 1993, IM Lim Seng Hoo, who had gone into retirement after more than a decade, had a conversation with Dr Nithiananthan and he queried who the strongest local player then was. Nithia replied that IM Hsu Li Yang, who was the defending National Champion (he won it in 1992 and 1993), is the best bet. A friendly match was promptly arranged at Cairnhill  CC.

This is the first game of the match, which showed that Seng Hoo is still a force to be reckoned with. We would like to thank the good doctor for the game-score, meticulously preserved to mark this previously unknown match.

For the record, Li Yang won 2.5-0.5 but I think spotting 15 years of play, Seng Hoo had demonstrated that he is still not easy to beat!
Posted by IM Kevin Goh at 10:54 No comments:

I was very pleased with a win I made at 3 minutes blitz - in which I had stopped my opponent's aggressive intentions with an exchange sacrifice to nullify his kingside attack.

Check out the following position. 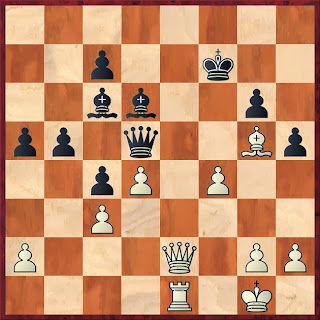 White to play...what is your assessment of the position?

Black looks good eh? Although White is exchange up, Black holds the initiative and has a powerful long light square diagonal battery bearing down the White kingside. Also, there are  no entry points for White on the e file while Black will simply ram down his queenside majority. In fact, my opponent caved in and played Qf3 and I happily traded queens and the queenside pawns marched to victory.

To my surprise, as I checked with the computer, it declared that Black is simply lost. Here's the analysis.

As I showed the position to Wei Ming and Olimpiu, both found the strong 1.Be7 which gives White the advantage though Black retains drawing chances. They both declared 1.f5! to be a classy move. Wei Ming remarked that he too had a similar experience.

We move back to his First Saturday GM event in 2011.

After sacrificing the exchange against Ukrainian GM Dmitri Maximov, Wei Ming emerged with this position. 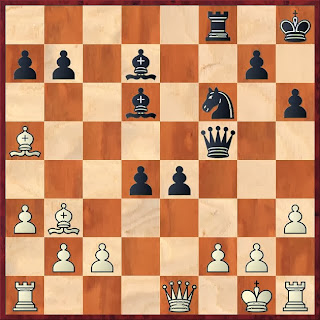 For the price of an exchange, Black has all his pieces activated perfectly, controls the centre absolutely with two mobile central pawns and is generating strong pressure on the f-file. Moreover, White's Rh1 isn't a very inspiring piece either. However, it's all an optical illusion as the game continuation below will show you.


That's why it's not enough to assess a position based on general considerations. Your eyes can deceive you!
Posted by IM Kevin Goh at 00:23 No comments:

Some updates - what we've been up to lately - by Junior Tay

As you have probably noticed, the blog entries practically dried up in the past three months or so. Both Wei Ming and I had been working on our respective chess books + e books for Everyman Chess which will be out next year. and we do hope to get your support for our publications.

Wei Ming's Chess Developments - Sicilian Najdorf 6.Bg5 should be out early next year and the book focuses on the latest happenings in the ultra-sharp line and improvements/refinements from his 'research lab'.

My Benko Move by Move is a repertoire driven guide on how to play my favourite opening against 1.d4 and this will be followed by Ivanchuk Move by Move, comprising illustrated games of my favourite player, Vassily Ivanchuk.

I have also started a column at chess.com and my first article Chess Tales from Asia: The Great Singapore Swindles (Part 1) is up already. Please do lend your support!

Update: Part 2 is also up at Chess Tales from Asia: The Great Singapore Swindles (Part 2) 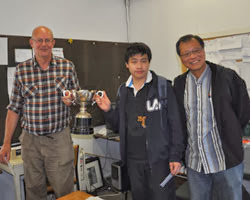 
IM Chan Peng Kong makes yet another sojourn to New Zealand to take part in the George Trundle Master Event and the South Island Championships. In the first event, he was unbeaten by pegged back to an equal 3rd placing with 8 draws(!) and 1 win. Here is his draw against FM Luke Li from the 1st round which was a precursor to show that he wasn't going to have an easy time in this event.
At the South Island Championships, he managed a tie for 4th place. It looks like he was determined to get a decisive result this time as he logged only one draw this time.
Posted by IM Kevin Goh at 10:42 No comments: