Boxing Day Blitz Match - Raffles JC Alumni vs the Rest of the World! by Junior Tay

A good friend and sparring partner of the gang, IM Lim Yee Weng notified us that he would be making a trip to Singapore over the Christmas week so I rustled up the usual suspects to see if they were available for some plastic-piece-pushing. Amazingly, 5 of them indicated their availability on Boxing Day so we decided on a double round Scheveningen blitz match.

The time control of 4 minutes + 2 seconds increment was picked instead of the traditional 5 minutes flat so that chess, instead of carrom, can be played when time runs low. 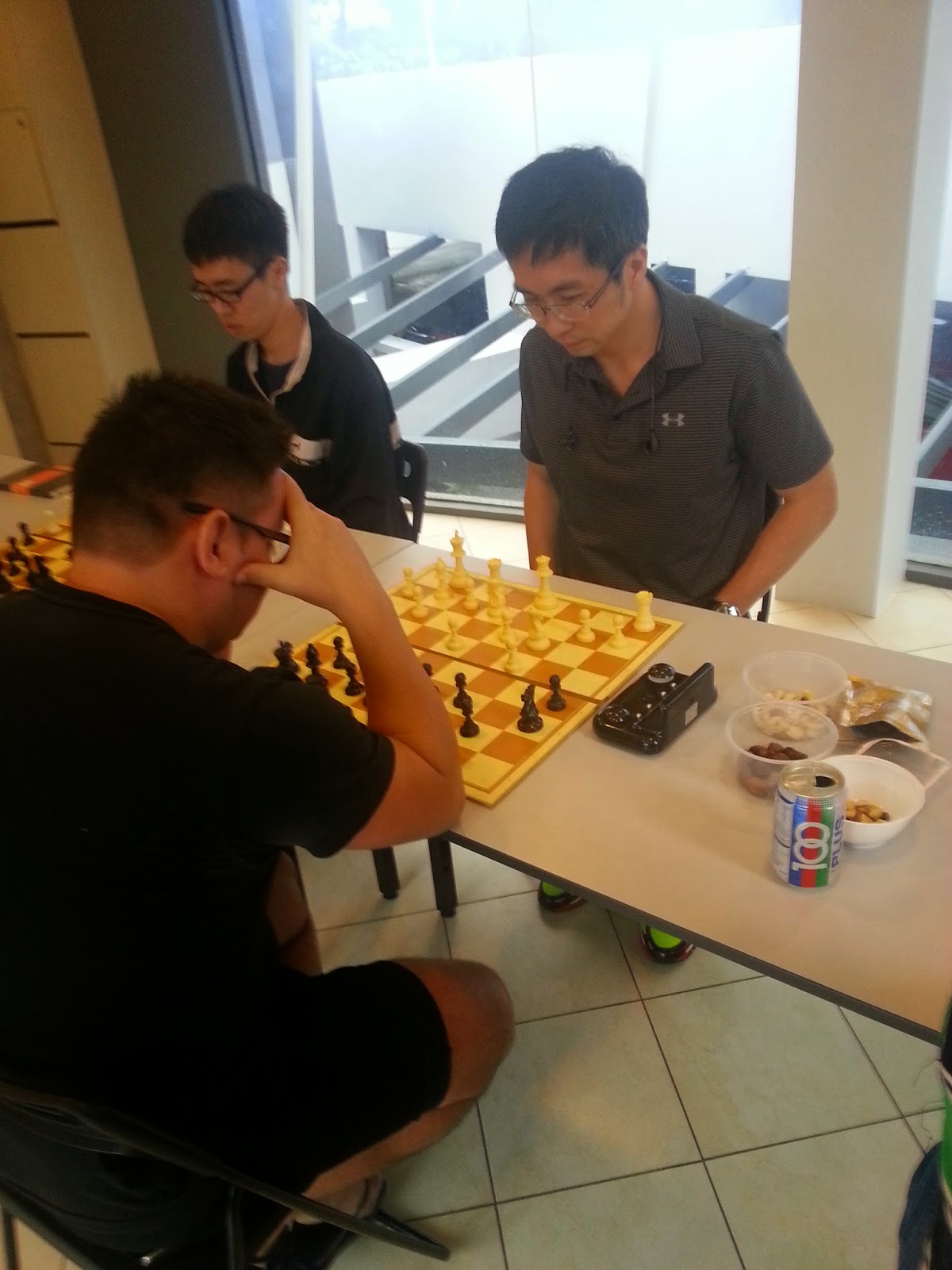 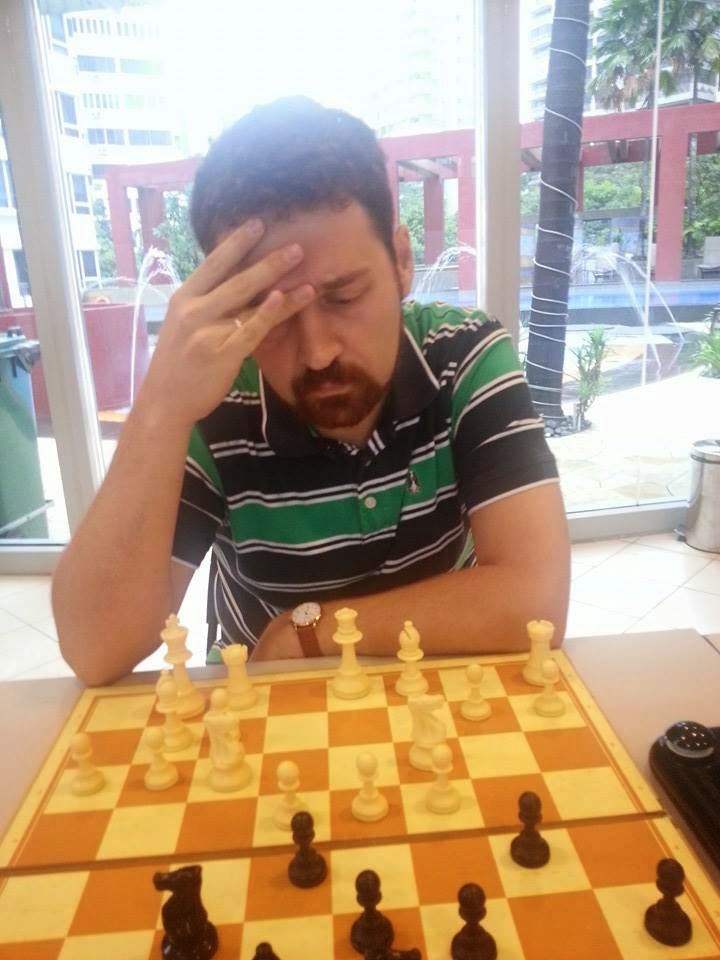 The match started on the wrong foot for the Raffles guys when they got walloped 3-0 by the ROW. 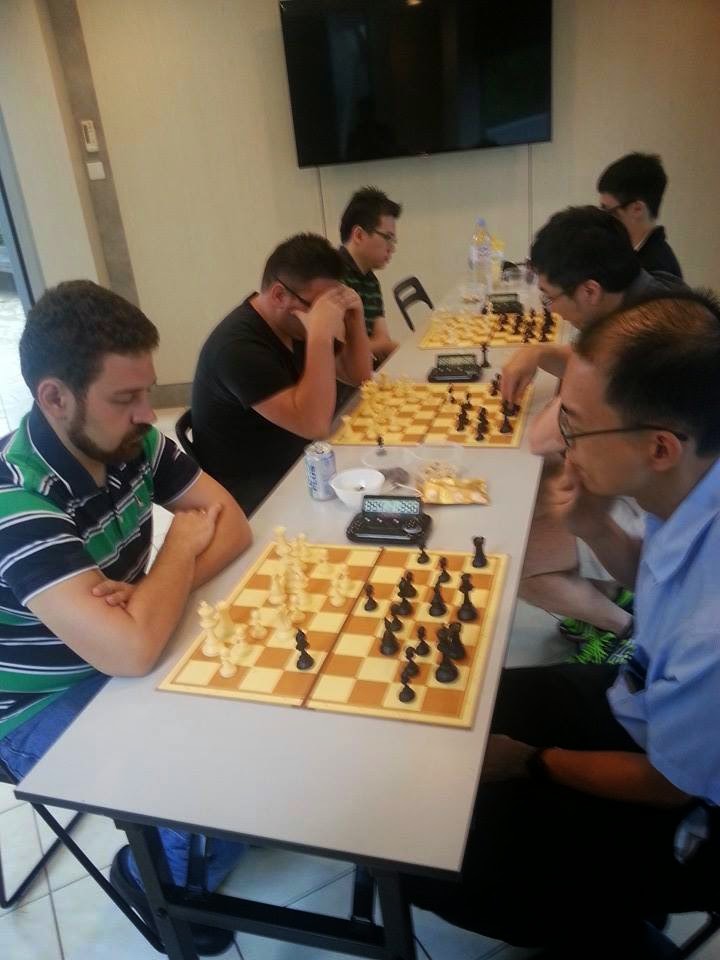 Rd 1 - Raffles got walloped 3-0!
The Raffles team fought back in the next 5 rounds but just could not overcome the deficit and the Rest of the World Team emerged 10.5-7.5 victors. Yee Weng was the top scorer for the team and overall with a brilliant 5/6 score with CM Urcan accounting for 3.5 points and FM Terekhov scoring the remaining 2 for a comfortable 3 point margin. They each won a signed copy of  Everyman's Chess Development: Sicilian Najdorf 6. Bg5. 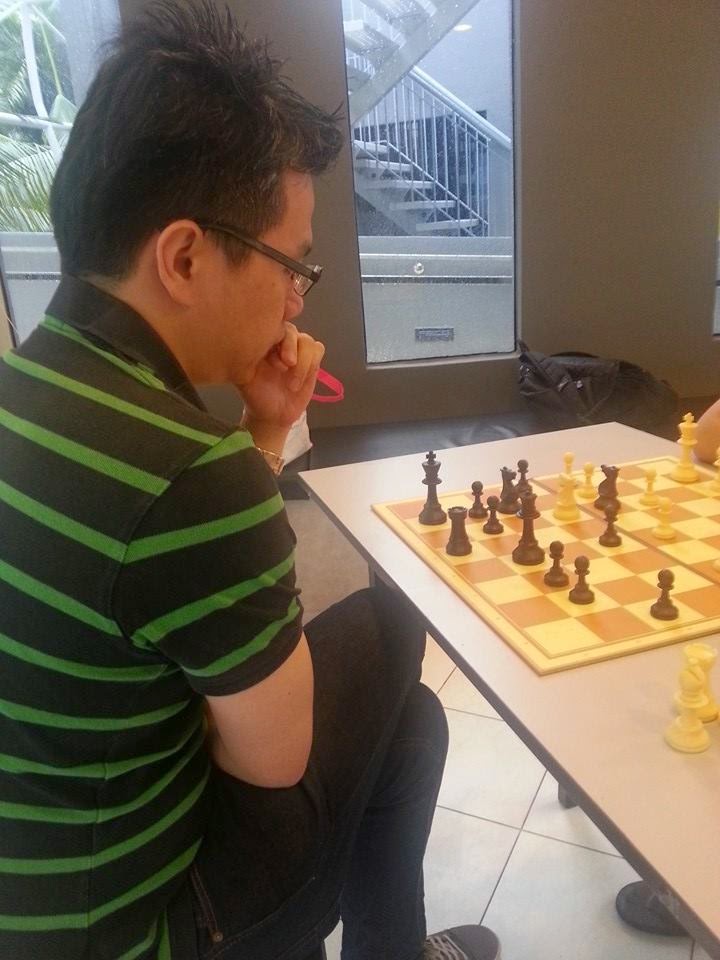 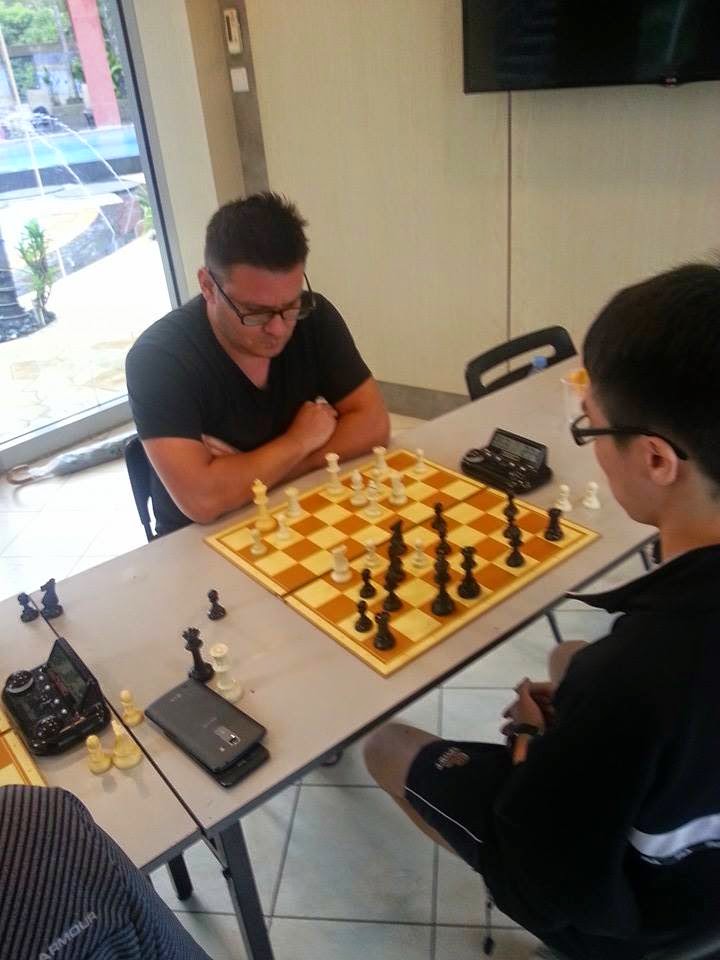 CM Olimpiu Urcan played the game of the match against a hapless Jarred
The top Rafflesian scorer was Li Yang with 3.5 points. Thus Yee Weng and Li Yang each won a copy of  Everyman's  Ivanchuk Move by Move. 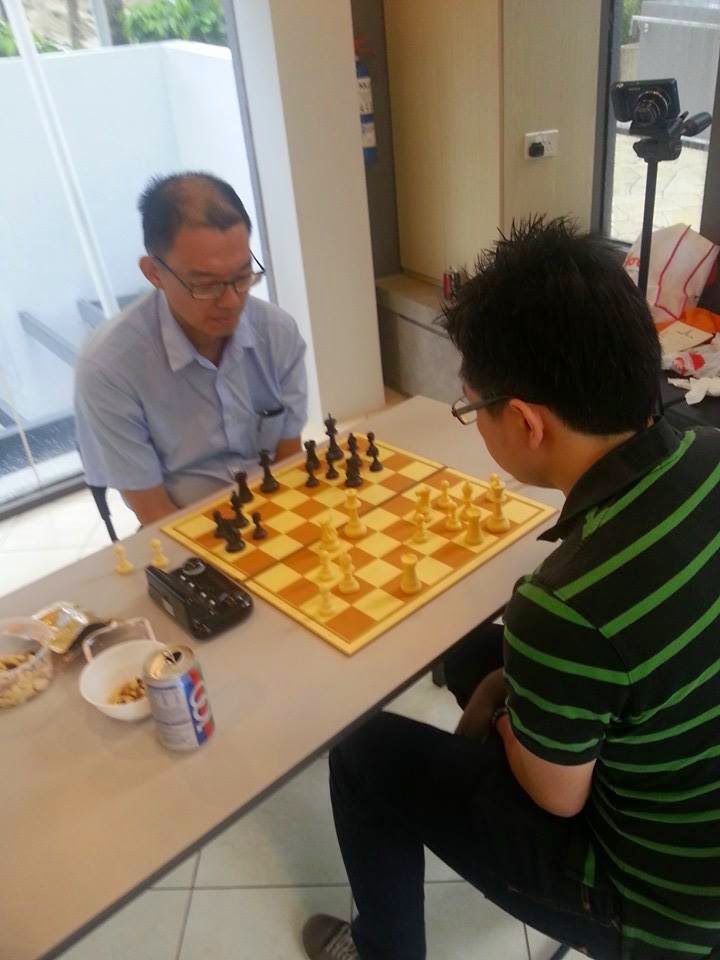 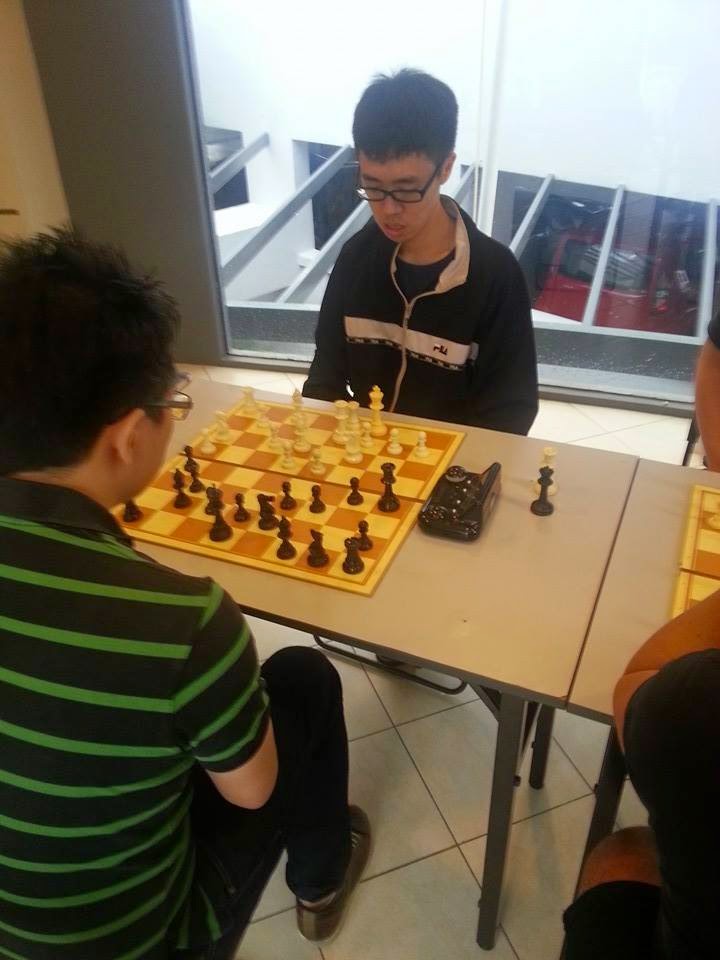 FM Jarred Neubronner redeemed himself in the final 2 rounds

Here are some games from the event.

Li Yang started off on a wrong foot, outplaying himself in the ending. Clearly, the one game warmup he had after arriving from work wasn't sufficient.

The following statement was posted on the SCF website:

"In view of the withdrawal of a player from the National Premier one day after the Technical Meeting, the EXCO decided to organise the National Championship by merging all the players in the categories – Premier, Candidates, Women & Challengers. There overall winner will be crowned National Champion provided he is a SC/SPR...."
The player in question is me. While I have no intention to begin any form of dispute with any party, I wish to highlight the following:
1) During the technical meeting, a decision was formed to include 3 players that did not qualify under the stipulations. This did not come as a surprise as the criteria is very high and Singapore does not have too many strong and active local players at present. Typically, these issues are thrashed out during the technical meeting when all the players are able to come to a compromise.
2) As there was no way I could have arrived on time (due to work schedule), I informed the in charge one day in advance, and even called him once I left my office to inform him my ETA. I arrived around 740pm only to realize that the meeting was over.
3) The deadline to submit the registration was 13 Dec, before 6pm. No late entries are to be entertained. I did not receive any information prior to the technical meeting on 15 Dec.
4) Last year, only 5 players played for the title in a double round robin.
5) The revised and combined players' list includes IM Jason Goh, himself an extremely strong player and an ex-National Champion. He is therefore a more than worthy replacement for me for the Premier event. The question why Jason was included only now, and not in the earlier players' list was also valid, although I personally feel that his inclusion is beneficial for the tournament.
6) I had informed the SCF President of my withdrawal a day after the technical meeting, via email. I listed down a number of reasons, the main one being the change of stipulations without my involvement.
7) I did not receive an official acknowledgement, neither did I receive a reply to my withdrawal notification.
With the above facts, I will leave it to the readers to form their own conclusions. I would have loved to participate (my 12th year in a row, probably an unmatched record) but will regrettably be watching from the sidelines this year.
In the meantime, Happy Winter Solstice, everyone!