Mighty Mok celebrates Christmas and New Year with back to back tourney wins! by Junior Tay

Just a week ago, during a Whatsapp conversation with Malaysian IM Mok Tze Meng, the full time chess coach (as well as 'chapalang' financial adviser, mobile chess book/equipment seller, chess arbiter, intrepid deal-maker and prankster) mused that he might consider ending his playing career to concentrate on work. 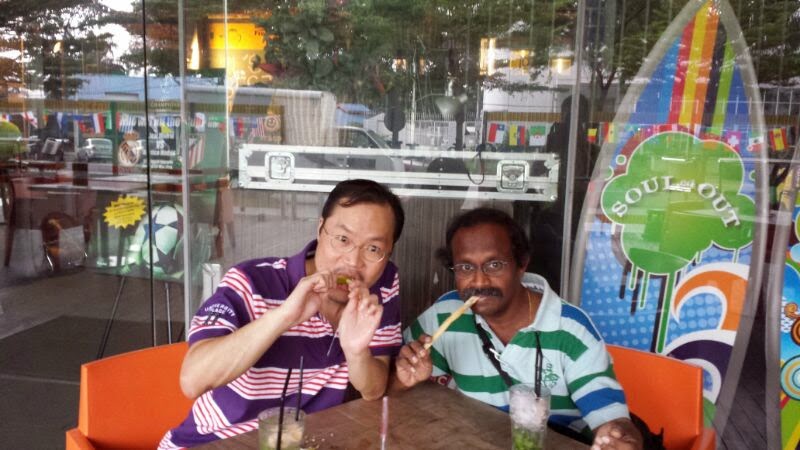 Mok messing about with Dr J Nithiananthan when the latter swung by KL last year
However, the chess itch got to him as he felt that he still got something to prove to his detractors  (that he was still the same force who overpowered GMs Van Wely and Amin in the 2012 Istanbul Olympiad). In a 62-strong Tesco Setia Alam field comprising 2014 Tromso Olympiad representatives Sumant Subramaniam and Fong Yit San, Mok set out to prove that he can still rack up the titles at 46 years of age.

With 5/6 heading into the final round, Mok was paired against Sumant who had a perfect 6/6 score.

Definitely a Merry Christmas and a Happy New Year for Mighty Mok!
Posted by IM Kevin Goh at 18:40 No comments: