After a horrendous KL Masters outing where Meng Kong could not muster up a single point, he took part in the abovementioned event where he was seeded 6th. In Round 2, he was stunned by 16 year old Mohammad Agus Kuniawan. However, the 1925 rated Indonesian boy was clearly underrated as he racked up a 2303 TPR by the end of event, with a fantastic 108 ELO point gain. Meng Kong kept plugging on, with no more losses in the event and he saved his best for the final game, having made his way back to Board 1 to face the top seed, 2426 rated Spaniard IM Marcos Llaneza Vega.

The win pulled Meng Kong to 7/9, tying for 2nd with Marcos and Filipino Nelson Villenueva and finishing 3rd on tiebreak, thus earning Meng Kong HK$5000. Li Bo from China won the event with 7.5/9. Hong Kong based Singaporean schoolboy Wong Yee Chit finished with 4.5/9 while a familiar face, Alberto Muniz Pardino who used to work in Singapore, scored 5.5/9 to win the HK$2000 prize for the 2nd best local player prize. 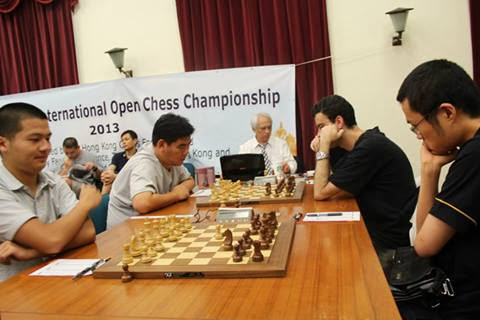