The Strongest Open Swiss event ever in Singapore by Junior Tay

The tournament was so strong that future GM Dimitri Reindermann withdrew after 4 rounds, after losing consecutive games to Jan Votava (now GM), Kramnik and a certain Mok Tze Meng. Already, my first 3 rounds' opposition looked like an outing at Reykjavik or Cappelle La Grande, I had Round 1 – FM Mohd Al Modaihki (now GM) – walkover, Round 2 – IM Peter Wells (now GM) – draw, and Round 3 – IM Rene Stern (now GM) – draw. Really got my dollars' worth by just paying for the entry fee of a CC event.

The Singaporeans who did best were IM Wong Meng Kong and FM Teo Kok Siong, who both scored 5/7 for a tie from 7th to 13th, half point away from the eventual winners. Meng Kong remained unbeaten throughout the event and even beat GM Vitalk Tseshkovsky in Round 4. Kok Siong, on the other hand, was on 50 percent after Round 4, but put in an incredibly strong finish to win the next 3 rounds. Of note is that another 5 pointer in this event is none other than Vladimir Kramnik who was bogged down by a loss to  another 5 pointer (in Round 5), IM Rogelio Barcenilla (now GM)!  The top performing Malaysian was Mok Tze Meng, who made 4.5 points for a tie from 14th to 20th.

Anyway, all the top players showed their professional side when in the final round, almost all the players (except 2385 rated Russian Alexander Malevinsky who had to beat Peter Wells to join them) who topped the table drew their final round games!

On tie break IM Andrei Luikin won the event from Topalov, Sakaev, Tiviakov, Votava and Malevinsky. Lukin was then coaching Sakaev who had won the World U16 event the day before. Lukin had since been credited by GM Peter Svidler as his greatest chess influence in his career.

In the Challengers section, Tea Lachava (who had won the World Under 16 girls event) finished 1.5 points clear of Kataryna Lewandowska, Yulia Levitan and Chin Chee Shun.

How's this field for a local chess event?
Posted by IM Kevin Goh at 14:52 1 comment:

Missing out on the Hong Bao...by Junior Tay

At the recently concluded Hong Bao Rapid, an extremely off form Tan Weiliang had to dig in hard to make 3/3, overcoming Heng Zheng Kai in an absolutely drawn Rook and Pawn ending thanks to the clock and even managed to smoke out Marcus Chen from a totally lost position. He proceeded to allow Sarawakian veteran Lim Kian Hua a one mover Knight fork which snared his Queen (Weiliang was two pawns up at that juncture). And yet, in Round 5, he had to face a tough opponent in Jarred Neubronner and here Weiliang decided that enough was enough. He eschewed a draw and launched quite an astounding attack. (Annotations from Weiliang). After a clinical and careful victory over Reinhart Sellmair in Round 6, Weiliang once again (like in the Kickoff Rapid 2013 final round) set up a juicy encounter against IM Luis Chiong again for a winner takes big 'angpow' game. A hard fought tussle ensued and just when the game was about to peter into a likely draw (see Weiliang's annotations), disaster struck... One thing to note about Weiliang's curiously patchy performance was that the day before , he had spent half the day on chess training. Hence his poor form came as a big surprise to him. After all, we should get better from more training, shouldn't we? I guess there's such a thing as 'over-training' which cost Weiliang his Hong Bao last week....
Posted by IM Kevin Goh at 22:30 1 comment:

Singaporeans vs the World Champions by Junior Tay 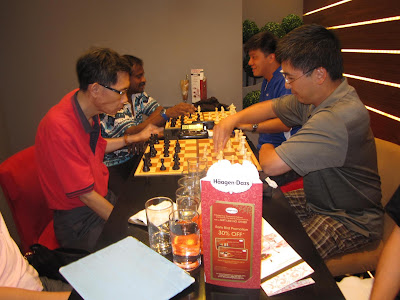 NM Olimpiu Urcan had, through his correspondence with former World Champion Vesselin Topalov, received some old gamescores from the 1990 Singapore-Queenstown Open. One of which was the following encounter with Singaporean FM Wong Foong Yin in which he featured in his blog.


Some time ago, I had done some digging into the old archives to see if any Singaporeans had personal encounters with World Chess Champions and well, IM Tan Lian Ann had played Smyslov and Spassky before. 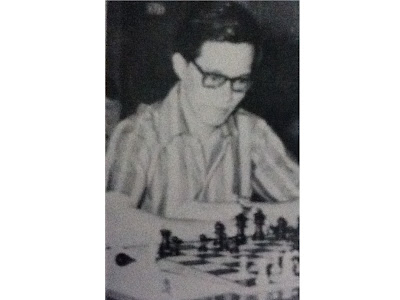 A picture of Tan Lian Ann in the 60s.