Olympiad Round 3 - Another disappointing day as Singapore crashes 3-1 to Kyrgyzstan. Malaysians shine as Mok and Yee Weng crush 2600+ GMs! by Junior Tay

Singapore's poor run of play continued as we got pulverised by Kyrgyzstan 3-1. It looks like there are few pushovers at the Olympiad. IM Li Ruofan played well and equalised easily in the opening. However, she was unable to defend a ferocious Kingside attack by her opponent. IM Ravindran Shanmugan's opponent was obviously well prepared for his 2.d3 Closed Sicilian and played extremely actively. Ravindran missed the wily 24...Bc5! and Takyrbashev swifty hoovered all the pieces off the board for an easy endgame win. Wei Ming was definitely off form as his opening play, usually his strong point, lacked its usual finesse and panache. He missed equalising continuations and in time trouble, sacrificed the exchange for a pawn but could not save the game. Zhang Zhong showed how to bounce back after a loss with a businesslike takedown. I just hope we can be inspired by the excellent play of the Malaysians who gave ELO 2600+ GMs a pasting en route to a 2-2 draw against Egypt. An instructive endgame win by an old friend who 'pretends' to be a trainer but plays like a seasoned world class professional. Indeed 'Like a Boss!". And finally, Yee Weng demonstrates to the former World Junior Champion that he is up to the task in the theorertical labyrinths of the QGD Anti Meran Botvinnik system.
Posted by IM Kevin Goh at 08:48 4 comments:

Olympiad Round 2 - Singapore slumps to a shock 2.5-1.5 defeat to South Africa by Junior Tay

The Singapore team, having gotten a favourable (on paper) pairing of meeting South Africa, was out for a strong result and thus fielded GM Zhang Zhong on top board while resting IM Ravindran Shanmugan. However, South Africa did not buckle as expected and inflicted a painful defeat on us. Zhang Zhong's attempt to win in a position where Black had comfortable equality backfired when IM Kenny Solomon destroyed his centre and collected material.

Daniel Fernandez bizzarely decided on an opening where he could at best equalise but his opponent made use of his lead in development to snare the minor exchange and put him away with good technique.
With Li Ruofan's opponent holding firm in an English Symmetrical to attain a draw, only Weiming supplied the cheer for the local team with this effort.

Olympiad Round 1 - Singapore blanks South Korea 4 zip, Malaysia stuns the Dutch to take 1.5 points off them- by Junior Tay.

A nice way to start an event but given the huge difference in rating, this was an expected result.

3 of the 4 games follow a similar pattern. The Koreans generally held their own in quiet, positional play. But once Wei Ming, Daniel and Ravindran stepped up the gas and played tactically, the Koreans got tentative and lost the plot. Li Ruofan gave a businesslike performance in whittling off pieces weaken her opponent's IQP, though she missed a nice tactic to nab a piece early. No matter, 4-0 is a good result and in Round 2, we will face South Africa.


On the other hand, our neighbours Malaysia performed incredibily well to lop 1.5 points off the strong Netherlands team. Lim Zhuo Ren played a speculative Knight for 2 pawns sacrifice which thoroughly confused 2630 rated GM Stellwagen and soon the 2 pawns compensation became 4!. Stellwagen steered the game into a draw after Zhuo Ren kept improving his position with confident play.

But what's more stunning is IM Mok Tze Meng's victory over GM Loek Van Wely (2691!). After outplaying the latter in the middlegame by clamping down on the weak d6 pawn, Mok proceeded to open the h file and kept pressurising the d and h file. In trying to retain winning chances, Van Wely opened the a file to invade down only for his Rook to become a target for Mok to bring his Queen over the b file after Qb1 and b2-b4! After some nervy time trouble moves including missing a mate in 2, Mok steered the game into a won ending and nabbed a famous victory!

Even Yeoh Li Tian and Lim Yee Weng gave their illustrious opponents GMs Jan Smeets and Ivan Sokolov huge problems before succumbing. So, well done Malaysia. This result will undoubtedly be reminisced as one of the greatest performance by a Malaysian team in Olympiad history. Congrats!
Posted by IM Kevin Goh at 03:25 No comments:

As our players make their way to Istanbul for the 2012 Chess Olympiad, perhaps it's a good time as any to speculate on a target. Daniel F mused that if the teams members perform at 50 points above their ELO ratings, they might finish in the top 40 but a top 20- 30 finish would be awesome.  Tan Weiliang also agreed that a top 40 finish might be possible if Wei Ming retains his fiery form at the Asian Nations Teams (pressure, pressure...) and the rest play up to their potential (more pressure...). As a yardstick, the 40th seed Kazakhstan  is rated 2524.

First, Wei Ming had to settle a medical problem as he was hit by hives upon reaching Changi airport and had to sustain an anti-inflammatory jab to settle matters. Hopefully, he will recover before the opening round.

Here's a game from Daniel F's final warm-up event (which he had concede after 5 rounds to catch an Istanbul bound flight). As Terry Toh had put it, 'the only other fella (besides him) to play a decent Hippo (somehow decent and Hippo sounds incongruent) is Daniel Fernandez...

Top seed IM Luis Chiong emerged the 2012 Queenstown Champion when his superior progressive tiebreak ensured he finished ahead of Tan Weiliang and Kelvin Wee after all 3 of them finished on 6/7.

Luis pushed ahead of his main rivals when in Round 4, he move ordered Weiliang in a complex Najdorf to gain the upper hand. Just when it seemed that he would simply run away with the title, Kelvin Wee dealt him a blow in the penultimate round by forcing him to sacrifice the exchange. It was a very satisfying win for Kelvin as he had regretfully let an IM off the hook earlier this year in Pardubice. Nevertheless, Luis won his final round against Lee Qing Aun to win the title.

Weiliang had to survive a difficult Evan Gambit position against Kelvin Wee after unwittingly walking into the famous Kasparov-Anand Riga Memorial 1995 Evans Gambit game. He somehow survived it to keep tabs on Luis. In the final round, he slowly but surely outplayed Nahim Zahar from the White side of a protracted Maroczy Bind. Nahim sacrificed a Rook for a Bishop and pawn to complicate matters but Weiliang was just too solid to let the position slip.

Here's how Kelvin notched his first win over an International Master.

Alos worthy of mention are the two juniors Qing Aun and Heng Zheng Kai. Qing Aun accounted for NM Koh Kum Hong in Round 4 after the latter repeatedly refused to accept draws in equal positions and subsequently overpressed. Zheng Kai showed he could take on the big boys as he finished unbeaten with 4.5/7. Had he converted his pawn advantage over Sundar Raman in the final round, he would have finished 5th. An impressive feat for a 10 year old boy. 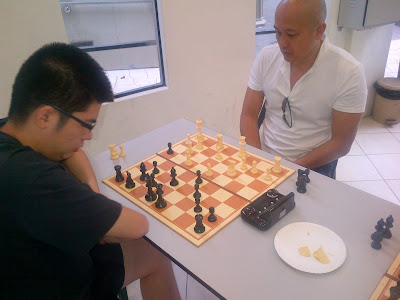 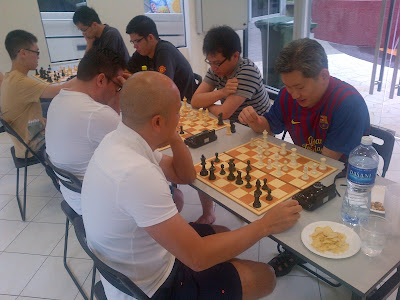 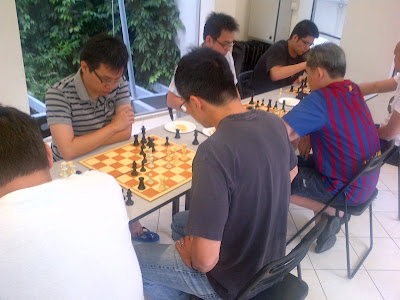 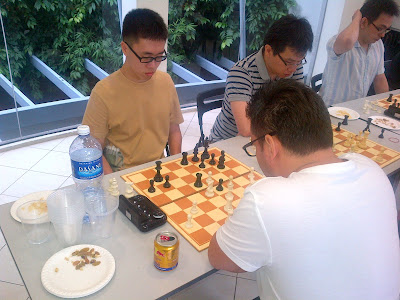 Here is an interesting position from the penultimate round.

A spectacular effort in the Yugoslav Dragon by Junior Tay

In the Angry Birds vs Young Punks match , I showed the game Tan Weiliang - IM Lim Yee Weng without annotations because I knew that such a sharp theoretical line required much more work than the other games. While watching the game, Dr Nithiananthan and I agreed that Weiliang's conducting of the White side of the Yugoslav Attack was one of the best games we have seen in local chess for a long time. Anyway, I spent one whole night researching and analysing this game (and missing the Mexico-Brazil Olympics Football finals in the process). When the SCN website was in operation, we used to have this series called the BSG (Best Singapore Games) where we featured top class efforts by local players. This one would have easily made the series. So without further ado, I present to you....


The abovementioned event is currently on at Nanyang Primary School with high entry fees (US$250 per player ( one hundred dollars discount for National Jr Squad players) and an impressive $44K prize fund in the following groups:

The format of play is 9 rounds Swiss System with a time control of 40 moves in 2 hours followed by 30 minutes for the rest of the game. 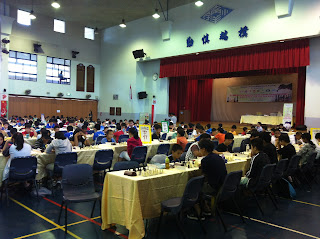 I must say the tournament setup was pretty impressive with the hall airconditioned and seats for spectators next to the playing area. There is also a high degree of decorum displayed by the spectators (parents/coaches etc).

I'm not sure why there are non-ASEAN players in this event (being an ASEAN Youth event) but the presence of the Chinese kids certainly raised the bar and gave the local participants a good look at the intensity  and strength of the future GMs at such a tender age. 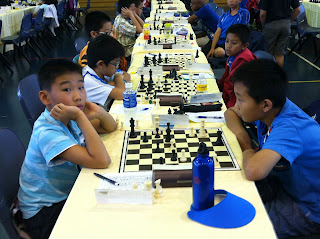 Daniel Fernandez and his brother Michael  have been living out of suitcases for the past month, playing 3 European tournaments on a go. In his last tourney in Paleochora, Greece, after Round 7, he was really fatigued as he had  played 18 consecutive games with only one rest day. Despite having scored 4.5/7 by then, he decided to take a break from the last two rounds to recharge his battery. For his efforts from the 3 events (e2e4 Buxtom,  Rethymo, and Paleochora), he had moved up to FIDE 2370, a massive 21.4 points gain. Daniel continues his European chess sourjourn next week in the Sommer A event at Baden Baden, Germany.

Meanwhile, Edward Lee scored 4/9 in the 2e Science Park Schaaktoernooi - group A event to prop up his rating by 2.55 points to reach FIDE 2129. Here is a mature effort by him in that event.