A final training session for Nanyang Primary School before the National Schools Team Championships was held on Thursday, 6th September 2012. What kind of preparation did they undertake? Mugging chess theory? Booking up on their rivals? Last minute tips on the vagarities of team events?

The school chess club decided to hold a tandem simultaeous match with FM Tin Jingyao and NM Olimpiu Urcan alternating moves against 37 members of the school team. This format is interesting and offers the players a good chance to win  because the differing styles of the masters might trip up the flow of their game and they have to second-guess their partner's plans swifty. Jingyao has an active style of play, with a penchant for sharp tactics while Olimpiu's chess can veer from ultra-positional to rabid-hyperaggression, depending on his mood.  Also, as this is Jingyao's first ever simultaneous challenge, it would be interesting to see if he can cope with the physical effort and the concept. 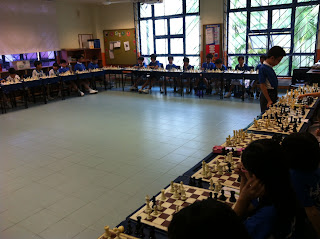 The players who were holding their own right into the endgame found it increasingly difficult to cope with the speed of the moves as more players fell wayside. After 3 hours and 20 minutes, the match ended with the score of  36.5-0.5 for the masters. Lester Teh, a Primary 4 student got the solitary draw. "It was very stressful. Although I was one piece up, after my move, the masters soon appeared on my board again and I was under pressure to make a move again so I blurted out the draw offer", Lester explained.

The 4 best performers in the event,  Lester, Tin Ruiqi, Samuel Tan and Royce Tan were awarded Chess DVDs for their fine play. The NYPS chess club teachers in charge hope that this event will stir up their fighting spirit for the National Schools Teams (Primary Section) due this Sunday on 9th September 2012.