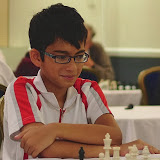 Michael Fernandez demonstrated at the e2e4.org.uk Chester Open that he can hold his own against ELO 2000+ players. Scoring 3.5/5, he finished in a tie for 4th position. Michael was one of the 4 unbeaten players at the event, the others being eventual winner GM Mark Hebden, runner up GM Keith Arkell and 2076 rated Liam Rabbitte.  Michael made a TPR of 2214 and will emerge 29 ELO points healthier.

After a slow start of 3 consecutive draws, Michael  concluded the event with 2 wins inclusive of the following which is a nice instructive lesson on how not to hurry in the endgame...