WIM Gong Qianyun literally pulverized the opposition at the National Women Championships 2012 with an astounding 9.5/10 result, finishing 3.5(!) points ahead of WIM Angela Khegay. Only WFM Victoria Chan managed to nick a draw off Gong. WFM Danielle Ho acquitted herself well with the bronze medal result - finishing with 5/10 points. Gong's result will easily push her ELO rating (currently at 2298) past the 2300 mark with a 29.4 point gain. 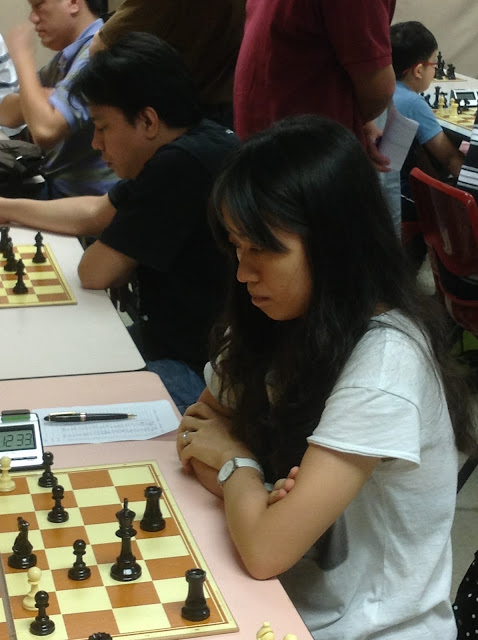 WIM Gong Qian Yun at the Cairnhill Open 2012 (Thanks to www.sgchess.net  for the pic).

Here is Gong's crushing win over Victoria with the White pieces. Meanwhile, on Sunday, IM Luis Chiong nabbed the bronze medal place in the National Premier playoff when he upended IM Lim Yee Weng in the 2 game rapid playoff, 2-0. As late as Round 4, Luis was mired (with Yee Weng, no less) in the cellar with 1/4 but both of them rallied in the 2nd half of the event to reach equal 3rd place with Rico at the end of 10 rounds. A great testament for fighting chess!
Posted by IM Kevin Goh at 18:58