The wonderful and yet brutal game of Chess - by Junior Tay

Grabbing lunch at Newton Circus Hawker Centre after 7 rounds of Cairnhill Blitz with NM Olimpiu Urcan while waiting for Round 5 of the Cairnhill Open to commence, I posed the question of 'why do we even bother to drag ourselves up on a Sunday morning to suffer?' to him.

He paused and pointed out what GM Danny King explained about why we love chess so much. The English GM had stated that indeed 'Chess is a brutal game' and likened the 'self-contained' game of chess to 'going into a tank' where one loses all sense of time. He went on to indicate how he loved that feeling of being in this 'universe' of one's own. Olimpiu felt that King had hit the nail on the head and that's the reason why we drag ourselves out of bed to suffer along with hundreds of others at a CC in Cairnhill.

In the final round of the Cairnhill open after your scribe and Weiliang had wimped out a draw on Board 1, all eyes were glued in on Board 2 where two veteran Pinoy International Masters were demonstrating how the brutal game of chess should be conducted. Everybody and his dog knew that IM Luis Chiong would pull out his trusty King's Indian but instead of Enrique's usual safe and solid g3 variation, he chose to enter the most complex and analysed Mar De Plata line in the Classical KID and calmly invited Luis to breach his King's cover. Luis accepted the challenge with a pawn sacrifice to send his Knight to h4, with every intention of detonating it on White's g2 to denude the King. Enrique secured his Queenside advantage and bunkered down on his Kingside, even offering the exchange to stem off Luis' ferocious attack. Luis preferred to remove a potential defender of g2 and kept training his tank turret down the h file, even as his time tricked down to blitz minutes. With a minute and a half left, Luis unleashed Nxg2! and finally blasted open the defences with f4-f3 to create unstoppable threats. 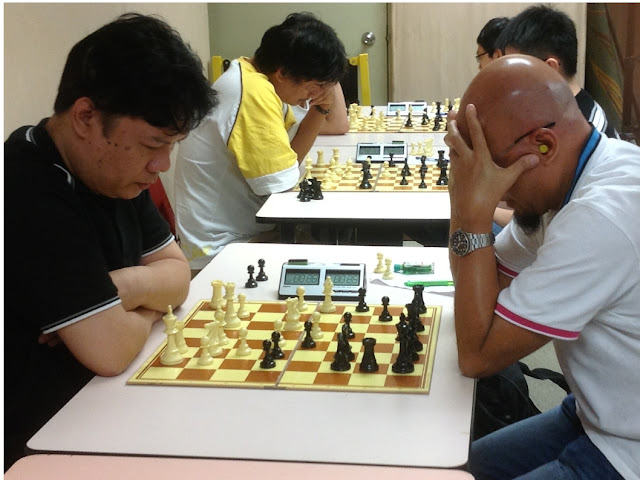 IMs Enrique Paciencia and Luis Chiong in full 'mental' jackets (Thanks to ogusg.com for the picture).

Watching these two veteran masters exchanging mental punches, I could envisage why Olimpiu concurred with GM King's statements. It was a brutal game which was definitely worthy of the spectators' attention and time certainly stood still for us while both sides were calculating furiously and sacrificing bits. Thank you Luis and Enrique for placing us in your mental universe of brutal no holds barred chess!

The video of the final 10 minutes of this exciting encounter can be viewed on NM Urcan's A Singapore Column.
GM Danny King's 'Chess is a Brutal Game' video can be viewed at CBS News