Mowing down one strong opponent after another, Tan Weiliang was the surprising winner of Cairnhill 2012 despite the presence of 3 Pinoy IMs and other assorted ELO 2000+ players (as well as last year's champion FM Tin Jingyao). Here's how he did it.

In Round 1, Weiliang showed great confidence in his calculating abilities. 2 pawns to the good, he chose to finish aesthetically with a sacrificial attack.
Round 2 had him facing the extremely dangerous Osric Mooi (whose attacking play had KO-ed quite a few IMs before) and outslugged him tactically.
This moved him up to top board where he had to defend with all his might against top seed and Cairnhill Blitz Champion IM Steven Kim Yap. Tired by the exertions, Steven made just one slip and Weiliang pounced and grabbed the point.
In Round 4, Weiliang got a breather as ELO 2290 rated Jimson Bitoon inexplicably gifted him the Christmas present of a Bishop for next to nothing. So Day 1 ended with Weiliang and NM Suelo on 4/4 with your scribe and IM Luis Chiong 1/2 point behind. Weiliang continued his winning streak on day 2 with a Shirovian style attack against NM Roberto Suelo in Round 5.
Round 6 was the watershed round for Weiliang as WIM Gong Qianyun's marvellous positional play had him on the ropes for most of the game. Only in this round did Weiliang stare defeat in the face....
In the final round, I got to play Weiliang and after confirming that he knows at least 14 moves of the Chekhover Sicilian theory, we split the point and ran off with the money.($700 for Weiliang (6.5/7), $400 for 2nd placed IM Luis Chiong (6/7) and $300 for me (5.5/7). 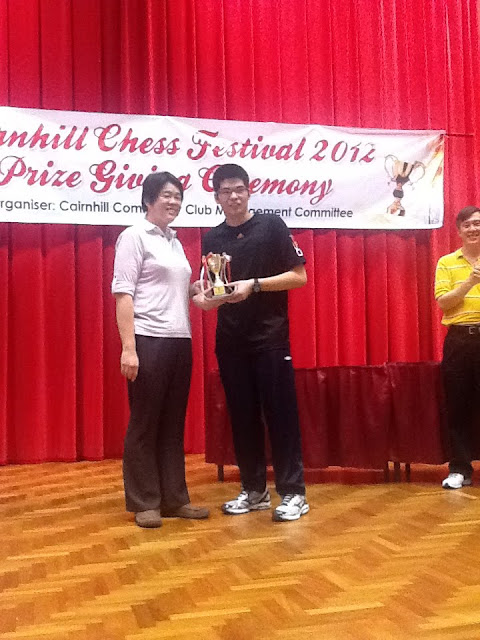 A happy Weiliang with his 700 bucks cheque and Cairnhill Champ trophy!

Had I somehow beaten Weiliang (much easier said than done...ask those previous 6 opponents of his), Luis would have emerged Champion instead due to his superior tiebreaks. I'm pretty pleased with my unbeaten result at the event and the following win over an out-of-form IM Enrique Paciencia (who had won the Toa Payoh Rapid with consumate ease a week ago).
A truckload of outstanding reports, pictures and videos on Cairnhill 2012 can be found on NM Olimpiu Urcan's blog.
Posted by Coralite Blog at 16:14