Slightly past midnight,  we received a FB message from Osric Mooi, informing us that Chia Chee Seng had left us. He had passed away in his sleep. 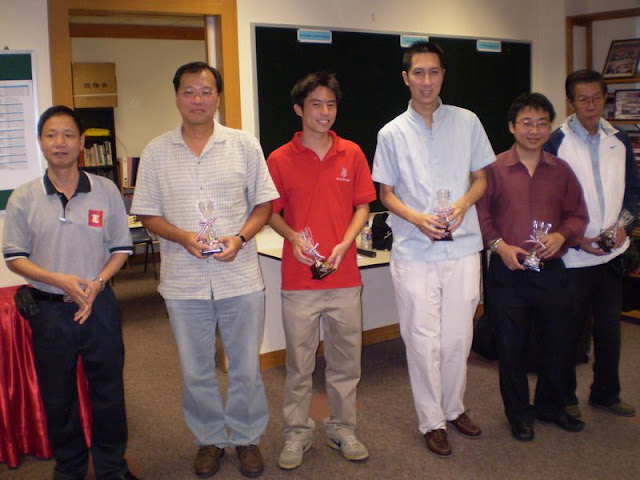 
After Wei Ming won the 2012 National Championships, Chee Seng wrote a comment on this blog, saying that he recalled going to Boon Lay Primary school to teach chess to an intermediate group before proceeding to an advanced group of players. After one to one blitz sessions with Wei Ming, he then realised that Wei Ming would in time become a national champion - which came to fruition...

Chee Seng also wrote about having trained another National Champion. After spending much time with Daniel Chan, he requested to his boss for a change of coach as he felt that Daniel was getting too strong for him to train. That is CS Chia, humble, unassuming, unegoistic and concerned about the welfare of potential masters. What was CS Chia like as a coach? It is best to let his student Daniel elaborate.

Daniel recalled, "I started playing chess when I was eight years old. Mr Chia was my very first coach. He tenaciously built my foundation in chess and without him, I would never have taken such an interest in chess let alone excel in it. He taught me with such passion and love for the game that it served as an inspiration for me. He was a simple man and one of few words, and yet always gave his best. He was always patient, understanding and supportive. I can only wonder how he managed to deal with a playful 8 year old. If you ask me what is the greatest quality of any chess coach? I would say it is one who goes out of his way to give his students the best he can. In this regard, Mr Chia genuinely gave of his all most selflessly. In fact, I could sense that he was quietly pleased the first time that I beat him in a game. Mr Chia devoted most of his lfe to chess. I will remember Mr Chia, a great player, a better teacher".

Most of us also remember CS Chia as a computer/Internet whiz and more chatty online than face to face. In fact, he was the fastest  Minesweeper game player I've (Jr Tay) ever seen. He was a popular Internet Chess Club Administrator and was also involved in aiding a stroke victim who was incapacitated during an online ICC game - by helping to pass on the message. Eventually, the person was rescued when firemen broke down the door to his house after being notified. CS Chia was also the first Singaporean to set up a website featuring Singapore chess - the CHIACS website, which was basically the forerunner to SCN, this blog and sgchess.net.

We spoke much more often on the Internet Chess Servers and one day, I was pleasantly shocked when he suddenly decided to present me a gift with the following message "OK, Given you a free ICC account for a long long time until ICC closes down!".  I really cherished this as IMs and GMs get free ICC accounts. Olimpiu recalls an incident seeing how the officials managing the huge National Interschools event were getting snowed in by the huge volume of work when CS Chia calmly showed up, adroitly manned the computer and cleared the backlog in 15 minutes flat and zipped off  nochalantly without requiring a word of thanks or a pat on the back.

Our last conversation was in December 2010. I greeted him at the arbiter's desk and he suddenly asked me to play in the Singapore Malaysia Challenge match, saying "Since you are here and can play, you should. If I am in the condition to do so, I would too". That was two years ago, when he has already been in poor health for some time.

But play he did three months ago, performing brilliantly  in the National Candidates in January with an excellent win over Tan Weiliang and winning the Bronze medal. Weiming recalled watching the game and was astounded at the speed in which Chee Seng whipped out the moves, even when he was defending against Weiliang's attack. Weiliang mused, "He was still a strong player even in his last days... In our last encounter(at the National Candidates), he defeated me very convincingly 1.5-0.5, and actually deserved to win 2-0".

CS Chia first made a big splash on the local chess scene in 1976, winning the Cairnhill Open, the Kampong Kapor Open and the Queenstown Club Championships. He won Cairnhill again in 1977 and1980, took the Kuo Chuan Open in 1980 and had the best Singaporean result in the 1979 Singapore International Chess Festival. Moving onto the regional circuit, he came in 2nd in the 1980 Penang Open and the Kuala Lumpur Open. In 1983, he caused a stir by beating IM V Ravikumar in the Asian Masters (KL Leg) and earned the IM norm with one round to spare. He first represented Singapore in the Asian Team Championships in 1979 and in the Olympiad in 1982 and 1984.

What's the strongest point of CS Chia's chess? We've asked the masters of our generation to recall.

NM Lee Wang Sheng noted, "I would say that he's probably the most natural player we had around in the Singapore scene in the 80s and 90s. He had great intuition and played fast, coherently and confidently. He played classical chess like he was playing a rapid game. And even if you were winning against him, you could never tell from his expression until he turned the tables on you".

IMs Terry Toh and Hsu Li Yang also concurred. Said Terry," CS Chia is one of the toughest guy I played as a growing chess player. Full of practical and creative resources to turn around lost games!" Li Yang also indicated that Chee Seng was the most resourceful Singapore player in lost positions, having experienced those feats personally.

In the following game, CS Chia was simply two pawns down against the champion of Indonesia's 1st National Championships, Bachtiar. if you look at the way he played, it seems as if he's not even remotely interested in getting his pawns back!


FM Ong Chong Ghee recalled, "He used to play 1...Nc6 against anything and win a lot, way before either Wei Ming or I played it. In the 1988 Nationals, he beat me easily and proceeded to show me lines I never even considered so much so that FM Wong Foong Yin, in his usual laconic way, said, "Chia saw everything and Ghee saw nothing!" Here is how CS Chia dismantled a strong master with 1...Nc6 efficiently.


CS Chia had never won the National Championships, finishing 2nd to IM Leslie Leow in 1984. However, he was one of the best blitz players in Singapore, having been National Blitz Champion a few times. Recalled Wei Ming "In one National Blitz, he led from start to end, crushed me and was playing GM Wu Shaobin in the final round. Chong Ghee had won his last game to finish half point ahead of the field with Chia-Wu yet to end. Ghee was trying to find out if he had at least tied for 1st, only to realise that CS Chia had crushed Wu to pip him by half point instead. Ignatius Leong then said "I can't believe CS Chia is still winning the National Blitz after so many years! You youngsters should be ashamed of yourselves!"

Super fast, calm under extreme pressure, it is impossible to read what he was thinking over the board as he puts on a game face regardless of the board situation.  He can suddenly hit his opponents with a maelstrom of tactics if they lose a bit of focus and he does it with a calm exterior. Here's a fine example of CS Chia's tactical elan.

Swift, resourceful and creative. That's the style of CS Chia. Here is how he worked out a beautiful concept to overcome Indian IM Manuel Aaron.

Very strong with the initiative, CS Chia can gambit pawns with calm aplomb while setting up ferocious attacks
CS Chia was also an endgame expert. I recall the SCN days when Olimpiu had put up a video showing how NM Koh Kum Hong won a difficult Rook +  2 pawns vs Rook  pawn endgame. CS Chia emailed to Olimpiu, demonstrating how Kum Hong could have won more efficiently and how his opponent could put up better resistance.

Being well known as a resolute player who eschewed draws and played for wins from all sorts of positions, ironically, Wei Ming recalled an instance of mercy from the master - "There was this National Rapid where I blundered a piece after 15 moves against him in the last round. I  played Bh6, and he went Qh4+, winning my bishop. I was distraught and was kicking myself mentally when he offered a draw and he said he only needed a draw to confirm 2nd place and didn't want to bully me!". 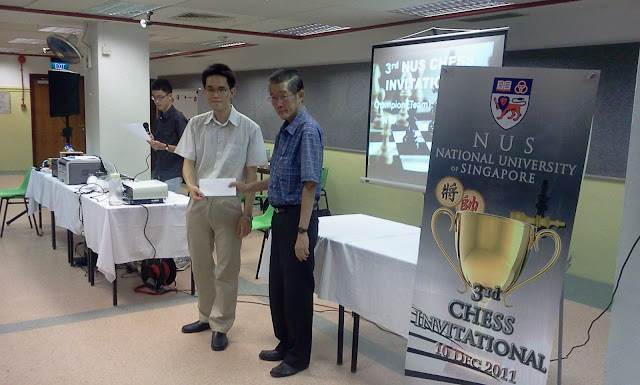 Finally, we bid CS Chia goodbye with a picture of this simple, unassuming chess master who has been integral in Singapore Chess for the past 40 years. Here, NUS showed their appreciation to him for arbitering the event. We hope this article does justice to you, Mr Chiacs!
Posted by IM Kevin Goh at 23:40