We won't even bother to repeat the accolades already mentioned by NM Olimpiu Urcan in his TCA Mega Open blog entry but it's certainly the grandest and most professional setup we've seen in local chess praxis. The tourney was held in the same Serangoon Gardens Country Club ballroom as the Kasparov Simul and Blitz in 2010 and the organizers certainly worked through many nuances which experienced tournament players greatly appreciate.

Just to name a few- Pencils provided for players to record the results or keep score if they want to, a buffet lunch and free flow of drinks and beverages, the numerous arbiters decked in bright pink for easy identification, tactful and non-abrasive manner of arbitering, especially when players get too caught up in the game or attempted post mortems too excitedly after the game and even a magic show to entertain the kids while the arbiters tote up the prize list. The best part was reserved for the last, as after the prizewinners step off the podium, they were directed to officials who passed the prizemoney to them  in cash immediately!

Even though the zero start was applied in the event, the organizers also did their best to make sure the players reach their seats before they get defaulted. Also, in the later rounds, the organizers saw it fit to partition off the Open section from the U10/12 categories, a gesture which we appreciate too.

Also, when the first round was delayed due to the lengthy explanation of the regulations and club facilities, we surmised that the other rounds would be delayed as well but to our surprise, everything ran extremely efficiently according to schedule like clockwork.

The generous prize fund of $2800 was definitely great news for the local chess fratenity. It's not just about the money but the opportunity for our locals to challenge the super strong foreign contingent of Grandmasters, International Masters and National Masters. We are glad to see our top juniors (and recent medalists in the National Interschools Individuals)  like Heng Zheng Kai, Ashvin Sivakumar, Carwyn Yeo, Cyrus Nisban, Emmanuel Hng, Tin Rui Qi, Lee Qing Aun and  Royce Tan chose to deck it out in the Open Section rather than to remain in the comfort zone of the  U10/U12 categories. Enrolling in the  school of hard-knocks is one of the best ways to improve at chess.

OK..now to the tournament proper. 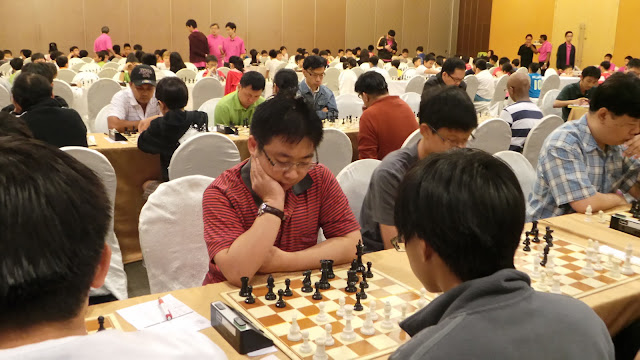 National Junior Squad member Timothy Ling created the first upset after beating IM Terry Toh in Round 1 and drawing Tan Weiliang. Your co-scribe was beaten by Isaac Ethan Soh after the latter nabbed a pawn nicely and showed good technique in reeling home the point. The Wee brothers were the relevation of this event. Elder brother Kelvin  racked up an impressive 5.5/7 with wins over IMs Luis Chiong and Terry Toh though he revealed that the clock beat Terry not his play). Eugene, on the other hand, also did a number on Terry and Olympian Steven Tan, and drew against Luis and Andre Jerome Eng. In the battle of the Stevens, the Singaporean version prevailed over the Pinoy IM.  GM 'Bong' Villamayor incredibly lost 3 games in a row from Round 3 to 5, with IM Luis Chiong, NM Olimpiu Urcan and Joshua Lee being the culprits. Bong's last tournament games were played in 2010 so it seems that the long layoff and constant coaching has taken its toll on the former Zonal and SEA Games champion.

Grandmasterly manners
Even though Bong was a shade of his usual standard, he displayed impeccable manners before, during and after the game. He would rise up from his seat to shake his opponents' hands, and even after he lost, he showed great equanimity in congratulating his opponents for their play. GM Gasanov also took the trouble to go to all the other prize winners in the Open Section to congratulate them earnestly and give a solid handshake.I think this shows that at the top level,  chess professionalism is not only about how well one plays, but also about manners and chess etiquette.

The race for the $1010
With Bong, Terry and Luis (after losing to Wei Ming) out of the race, Gasanov, Wei Ming and Enrique sprinted off to 4/4 before Wei Ming outlasted Gasanov in the ending and Leonard Reyes stopped Enrique with a draw. FM Dominic Lo, taking a breather from his medical studies, joined the hunt for the title in Round 6 with 4/5  but CM Jarred Neubronner ended his chances. 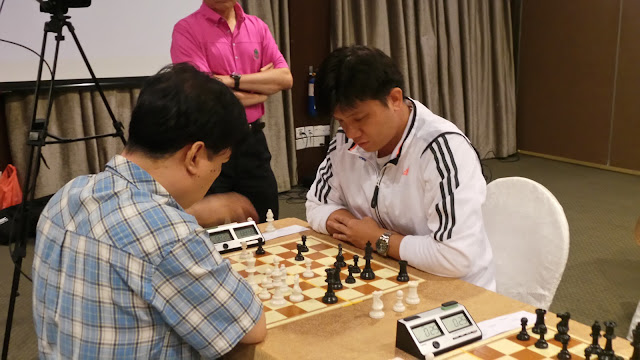 Enrique vs Wei Ming - a sudden, abrupt twist in the end  which left the National champion reeling....
Meanwhile Enrique pulled off an incredible swindle (OK, he was at least equal by then) to beat Wei Ming who was virtually inconsolable after the game. Equally outlucked was Tan Weiliang who was on the receiving end of a remarkable Steven Yap swindle.

In the final round, IM Steven Yap and IM Enrique Paciencia were playing for the top spot as 6 or 6.5 points meant one of them could be the ultimate winners. However, they fought all the way to a standstill and this allowed Goh Wei Ming to clinch the title on tiebreak with the grittiest of bulldoggerish defending against a rampant Jarred Neubronner.

So the top honours go to Wei Ming, Enrique (who showed a return to form after an indifferent 2012) and Steven Yap, Nelson Mariano III and Kelvin Wee.  Joshua Lee pulled off an incredible performance and played 500 points above his rating to make the prize list after a final round win over Dominic. 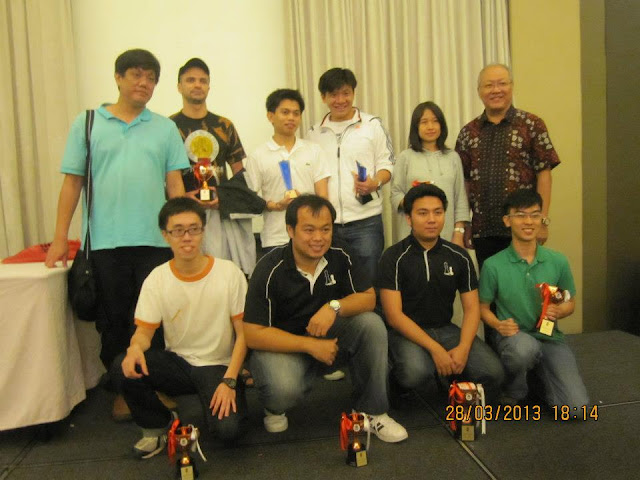 The top 10 prizewinners in the Open section (sans Enrique who had a prior engagement) - Picture swiped from Wei Ming's facebook.

There was also the odd attempted gamesmanship - An experienced tournament player was facing a master and a few moves into the game, the former suddenly tried a mind game trick by querying the latter in an accusatory tone - "Why aren't you recording the moves?" The master laconically replied "You record lor..., I only record games against masters". Owned...as the master won handily.

First - the slayers of the Goliaths.

Kelvin Wee wormed his way out of a Sicilian Najdorf squeeze to overcome IM Luis Chiong in the endgame. (Game annotations by Kelvin)

Before the tourney, Olimpiu Urcan told us he was going to start flinging flank pawns in the opening and our advice was for him to take it easy. What if his students see him playing such travesty....but did he listen? Watch the following game annotated by Olimpiu.

Next up, a couple of miniatures by the Ah Pek.

Aspiring players, take heart that ELO 2000+ players can miss one movers and get mated. Don't believe?

Let's see how tough it is to make 1010 bucks. Game annotations by Wei Ming and notes by Jr.
Finally, the best game of the tourney, as attested by spectators of this barnstormer of an attack. Thanks to Olimpiu for annotating this!
Posted by IM Kevin Goh at 21:55