The one mere second that decided the Whampoa Rapid title! by Junior Tay

Final Round - Whampoa Rapid. On Board 1 was Filipino NM Reggie Edgar Olay needing only a draw against FM Jarred Neubronner. Reggie, who already has 3 IM norms looked to be coasting home with an advantageous opening and he was aided by Jarred blundering an exchange. However, the game got messy according to CM Lau Keng Boon and Jarred got the upper hand in the endgame, especially time-wise. As the clock wound down, Jarred only noticed that Reggie's time had reached 0:00 while he had 2 seconds left and upon pressing the pause button, his time ran down to 0:01. Boy, that was close. Only after the game did spectators inform Jarred that Reggie ran out of time when Jarred had 8 seconds on the clock! 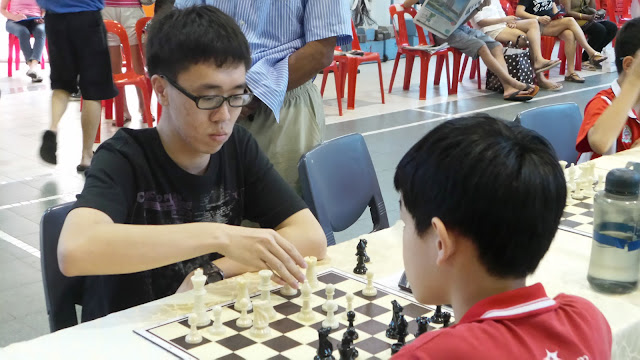 FM Jarred Neubronner at the Whampoa Blitz event where he finished 2nd to IM Luis Chiong
(picture courtesy of sgchess.net)

Here is Jarred's Round 5 win over Napolean Recososa annotated by the winner.

Final Results of Whampoa Rapid can be found on chess-results. Also, do look at sgchess.net's generous coverage of the Whampoa Blitz event with many excellent pictures, gamescores and videos.
Posted by IM Kevin Goh at 22:49