Both Jarred and Luis dominated the respective events so comprehensively that they could even afford to sit out the final round and still claim the titles.

Jarred scored 9/11 in the Serangoon Blitz eventually, only dropping games to FMs Tin Jingyao and Liu Xiangyi and shrugging off the challenge of Pinoy masters such as CM Nelson Mariano III, NM Roberto Suelo, IMs Luis Chiong and Enrique Paciencia. However, things didn't go as smoothly for him as he stated that he had lost positions in about 4 games and was lucky to win them. 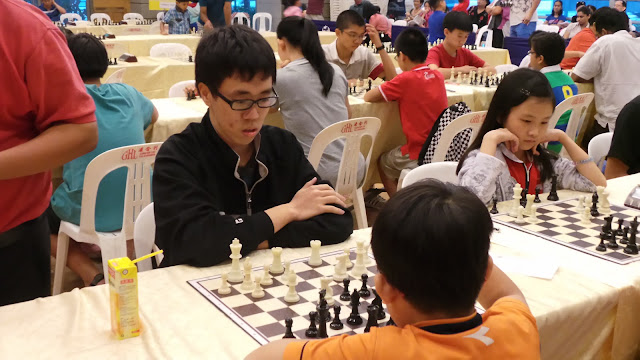 The critical game sealing his ultimate victory was his Round 10 win over IM Enrique Paciencia.

The next day's Rapid event saw IM Luis Chiong scything down the field to finish a perfect 7/7, a whooping 1.5 points ahead of IM Ravindran Shanmugan, FM Tin Jingyao and Jarred. One surprise result was the meltdown of CM Tan Weiliang who was in contention after Round 4 with 3.5 points and lost 3 games in a row. Weiliang remarked after the event that he has placed far too many non-stop committments on his plate from Tuesday to Saturday before the event. Thus it is a timely reminder for chessplayers to pace themselves well as chess is hard work indeed and if you're a little off, punishment on the board comes swiftly. 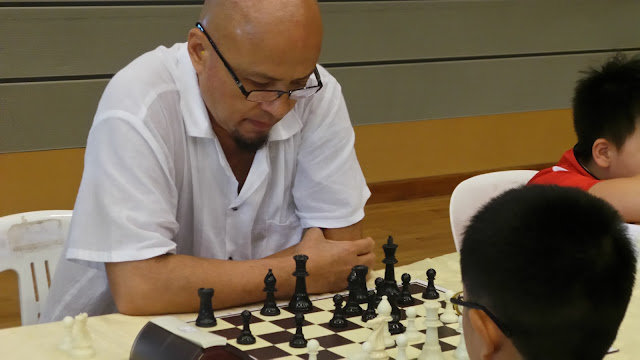 Watch the following mature display of controlled aggression by Luis at the Serangoon Rapid. Luis had a strong initiative on the Queenside in a King's Indian where CM Olimpiu Urcan's Kingside pawn storm had barely started. Olimpiu set up a devious sacrificial idea to accelerate his Kingside assault and this is how Luis cleverly dealt with it. Final Results - Serangoon Blitz
Final Results - Serangoon Rapid
Posted by IM Kevin Goh at 09:24