After 2 tough blitz games with a French FM, Paul Velter, online, I realised that I have read about him just recently and congratulated him on his recent IM norm in the 16ème Open des Vins du Médoc event (English Translation- 16th Wine Open event). He asked me where I read about it and we had a good laugh at IM Alex Wohl's account of the event, especially of Paul's picture. What's unusual is that Paul had won 52 bottles of Médoc red wine instead of the standard cash prizes which most tourneys award for winners. The winner (Paul) gets the total number of bottles as per his weight (meaning Paul weighs 52 kg) while the 2nd place winner gets bottles according to half his weight up - all the way down to the 6th place winner who will get 1/6th of his weight in wine. Alex had won 20 bottles for 5th place so you can do the math....No one goes empty handed in the Wine Open as every participant gets a souvenir bottle anyway as well as 1 free Yoga session per day!

Since I started working as a teacher, I began to play more online chess events than over-the-board and have been the recipient of prizes such as NIC Magazine subscriptions, KARL (a German chess magazine), Chesstoday, Chesspublishing.com subscriptions. One particularly memorable event for me was Playchess.com's 1st Lasker Memorial event where 19 players play 4 games of blitz against each other (72 games in total!) and I narrowly edged out FMs Samy Robin and Arnold Essing for a spiffy 5 kg metallic trophy with wooden stand which Chessbase actually couriered to my doorstep! Wei Ming used to win all these playchess events on a weekly basis though.

There was one interesting event in the early to mid 2000s held in playchess.com - the Gifhorner Online Open event, which was organised by a German chess club. After the qualifying rounds, the players moved on to an 8 player KO event and the winner received a 1 gm gold bar! Of course it's probably worth about 50 bucks in today's context but hey, the winner could say in earnest that he won the genuine gold medal in that event, not a plastic version. In 2005, I made it to the Quarter Finals only to get KOed by German IM Michael Kopylov and the winner was Bulgarian FM Tihomir Atanassov Dovramadjiev who also won the European Chess Boxing title in the same year. 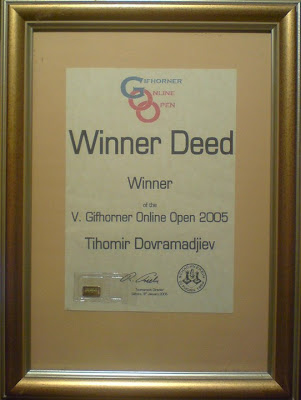 Yes, that oblong thing on the bottom left in the  plastic wrapper  is the 1 gram gold bar...

There was also the World Mind Games Qualifiers / Candidates / Finals Online event held late last year also on playchess.com and we were eyeing that Samsung Tablets awarded for the  2nd and 3rd prize.  None  of the local players made it to the Final though IM Daniel Fernandez came very close.

In the local context, we have NTUC vouchers awarded to top finishers of the recently concluded Patrick Tay rapid event,  2nd hand chessbook prizes given out by a local organizer and also the famous Khoo Geak Chong Hainanese Chicken Rice prize for the winners of his blitz events for his students. The winners of the National Interschools events in the late 1990s/early 2000s would surely recall winning a huge hamper of goodies to go along with their trophies, surely making their mummies very happy.

IMs Goh Wei Ming, Hsu Li Yang and Lim Yee Weng remembered receiving health boosters such as bird nests and Brands Essence of Chicken prizes, which made perfect sense as chessplayers would benefit with supplements which could help raise their energy level or concentration.

One strange prize I received in the 1989 Cainhill Open for finishing as one of the top two Cairnhill Club players (tied for 4th in the Open, I think), was half a ticket for a dinner for 2 at Hotel Asia...except that the other guy who won the prize was NM Koh Kum Hong. It was quite a dilemna as then I hardly knew the chap. However, the matter was resolved simply when Kum Hong generously decided to just give me the whole prize. I suppose by then, he had won the local events so many times, such trifle prizes cease to interest him any more.

Another  interesting non-cash prize I have heard from CM Olimpiu Urcan - In a Transylvanian Open event, besides the cash prizes accorded to the top finishers, a 'shame bread' prize sponsored by a local bakery. It was awarded to the player with least points after each round. 11 year old Olimpiu, was the unfortunate receipient of 3 such loaves of bread. This hat-trick 'honour' only spurred him to improve and 3 years later, he made a National Master norm in the same event.

As pointed out by Olimpiu perhaps the most novel prize given for top flight chess was from the  Piterenka rapid/ blitz event held last December when up for grabs for the winner was a  piece of land in the Moscow region, along the river Piterenka. In the Armagedon final, Karjakin, who had 4 minutes, needed a draw to clinch the prize while his opponent Grischuk, with one minute extra, needed to win. The game ended in stalemate and thus Kajakin become a landowner. Now that's a cool prize indeed!