The 1st round ended evenly with one adjournment (IM Lim Yee Weng vs CM Jarred Neubronner postponed to next week). The games were very hard fought.

During the Thomson event, when IM Terry Toh beat Weiliang, the former's King walked from e8 to e7 and eventually to c6 during the middlegame. This time, Terry made 2 pledges...Firstly, no more crap openings- he will play something respectable with Bobby Fisher's opening - the Sicilian Najdorf...

The first problem Terry faced was when he tried to prepare the Polugaevsky Variation of the Bg5 Sicilian Najdorf the night before the game, he realised there was no way he could study 3000+ critical games in the line. So he ditched the idea.

And secondly, he pledged that he would attempt to castle Queenside and then walk his King to the centre...What do you know..it really happened! During the game, the players (including Li Yang and Weiming) could not help laughing at the irony of his statements. 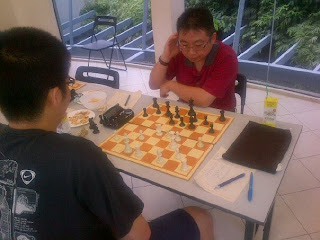 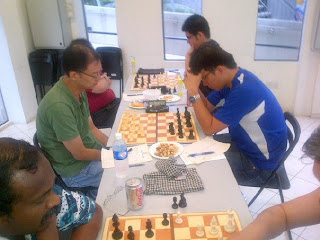 So, the results of the 1st round of the Angry Birds vs Young Punks Training Match depends on the Yee Weng - Jarred encounter.
Posted by IM Kevin Goh at 22:42