The 6th World Mind Games qualifier was dubbed the 'Asian qualifier' by Jarred Neubronner due to 11pm timing  for us (most of the qualifiers are at 2 am). Indeed, there were quite a fair number of Asians competing this time in the 93 strong field. 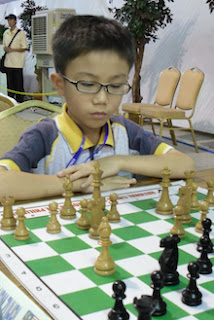 FM Tin Jingyao (Thanks to NM Olimpiu Urcan for the pic)


This morning, in this qualifier, FM Tin Jingyao and NM Olimpiu Urcan clinched their berths in the Candidates event which will be held on Saturday 27th October 2012 at 10 pm on the playchess.com server. Jingyao and Olimpiu finished in a tie for 9th to 19th place with 6/9 but made the top 15 due to their superior progressive scores. IM Kevin Goh Wei Ming came to grief when he got disconnected just as Round 1 was about to start, prompting the Tournament Director to forfeit his game. After 3 straight wins from Round 2-4, his connection went down again and the TD decided that he should cease play as it would be unfair to his opponents to deal with the massive lag. So it was  definitely, not Wei Ming's day..er.. night.

In his first tournament after the end of his PSLE this week, Jingyao's lack of practice was evident in his game against Chinese GM Wang Rui.

More Benko (or Volga - as Olimpiu prefers to call it) Gambit fever as Olimpiu and Jingyao made their qualification berths by sacrificing the b pawn + more and won beautifully.
The Chessbase announcement on the event can be found here.
Posted by Coralite Blog at 15:14