Games from the Toa Payoh West Rapid 2013 - by Junior Tay

The abovementioned event, which boasts the 2nd biggest prize fund among local Swiss Opens (after the TCA Mega Open) had thirteen ELO 2000+ rated players participating, inclusive of 2 IMs and 2 FMs. IM Enrique Paciencia claimed the title on tiebreak (from fellow 6 pointers Leonard Reyes, Reggie Olay and FM Tin Jingyao) after a full-blooded last round draw against IM Luis Chiong. With White in a Nimzo Indian, Luis whipped up a massive attack against Enrique's king and was rebuffed by precise defence from Enrique. Eventually Luis repeated moves settling for a truce. In the post-mortem, Luis was convinced his position was better and he should have pressed further but Enrique kept demonstrating resource after resource to hold the position. However, in Round 6, Enrique was on the ropes against National Age Group U12 champion, Ashvin Sivakumar on top board when he conjured up the following... An excellent photo capturing the shocked look on Ashvin's face upon realising that he had been outfoxed can be found on Olimpiu's website here. As the other tournament leaders, Jingyao and Leonard Reyes drew on board 2, this gave Enrique a half point cushion going into the final round. Jingyao, in order to join the tournament leaders after the final round, was stymied by Tan Jun Hao for most of the game as the latter played ultra-solid chess. We join them in the endgame here. And hence, Jingyao kept pace with the 3 Amigos...sorry, Pinoys at 6/7. Now, the recently concluded World Championships match was in a sense, the triumph of youth over the experienced old guard. However, in our backyard, Tan Poh Heng scored one for the oldies in this smashing victory over FM Jarred Neubronner (who generously sent us the gamescore). 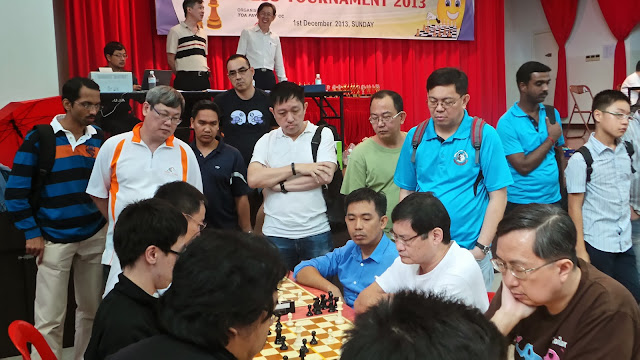