Personally, I would prefer to play in events where I can get a decent number of rounds with stronger players to ‘teach me a lesson’. I also believe my contemporaries also feel the same way, that is, they would prefer tourneys where they could be put to the test by strong masters. Hence, these days, I would rather take part in Chess.com’s Titled Tuesday event, where the US$1000 prize fund pulls in ELO 2700+ type super-GMs like Hikaru Nakamura, Baduur Jobava, Maxime Vachier Lagrave just to name a few. In my two attempts at the event, I have played GMs Jon Ludwig Hammer (got a lucky draw) and Laurent Fressinet (got hammered) and both were incidentally King Magnus’ World Championship seconds.

A recent innovative concept by Olimpiu Urcan caught my attention immediately. Together with Mark Tan Koh Boon, they co-sponsored one of the strongest local events possible. By the way, Mark is no slouch at chess, having beaten Wei Ming and Julio Sadorra (now GM) in tournament play before.

The conditions established were equally promising too, for example,
*Early personal invitations to the masters to take part with no deadline to reply – as long as they do so before the start of the event
*Big spacious, air-conditioned condo function room
*Low entry fees - $10, which is easily 3 to 10 times lower than the local events
*Generous time-frame to decide whether to participate
*Bottled mineral water supplied during games
*Flexibility – the participants, by majority vote, can decide on changes to the schedule for example

*Publicity – the event would be covered via pictures, video, and game scores swiftly afterwards.

What more can you ask for? Soon, 16 ELO 2100-2400+ players signed up and with 3 IMs, 6 FMs and 1 WIM in tow, a jolly good chess tussle was in the works with no easy rounds for anyone. In fact, Jarred Neubronner got it absolutely right when he stated that ‘the winner will not score more than 8 points’.

Wei Ming and Benjamin Foo surged into the lead after 3 rounds with maximum points. Some of my chess pals were quite surprised at young Benjamin’s strength but not us. At a blitz team match held at my place, he scored 4.5/6 vs the likes of IM Hsu Li Yang, IM Terry Toh and FM Ong Chong Ghee - a very impressive result. Round 4 was the matchup between Wei Ming and Ben which ended in a draw after careful play by the latter. Ben took over the lead in Round 5 by beating Reggie Olay, a Filipino NM (with 3 IM norms!) while Wei Ming was held to a draw by FM Tin Jingyao. Round 6 turned the leaderboard into a tizzy when Benjamin was ousted by FM Andrean Susilodinata and Wei Ming got outlasted by his nemesis Jarred. So, at the halfway mark, we had Ben with 4.5 pts, followed by Wei Ming, Jarred, Andrean and Timothy Chan with 4. The latter (another triple IM norm holder) had not played competitively since November 2012. So how did he keep up with the heavyweights at the event? According to Wei Ming, Tim had been playing online regularly for the past month just to keep in shape for this event and it has certainly paid off!

After the break, Ben and Wei Ming stepped up the gas by beating Jarred and Tim respectively. At this point, Reggie Olay (with 3/6 only) started to hit an awesome vein of form but more of that later. Your scribe proved to be the spoiler of the event after drawing Wei Ming and beating Ben in the next two rounds (he missed a simple windmill!) in the next two rounds. Thus, by round 9, we had Wei Ming and Ben at 6.5 points followed by Reggie, Tim and your scribe at 6 points. In the penultimate round, I dropped off the title fight after getting comprehensively beaten by Reggie while Wei Ming and Ben clung on to joint lead after beating Suelo and Gong Qianyun respectively. Tim kept pace by accounting for FM Nelson Mariano III.

So at this point, it was Wei Ming and Ben with 7.5 followed by Reggie and Tim with 7 points. All of a sudden, we have the revenge of the Pinoys as ALL of them magnificently won their games in the all important final round. Wei Ming was outplayed by national coach IM Enrique Paciencia and Ivan Gil Biag took down Ben. 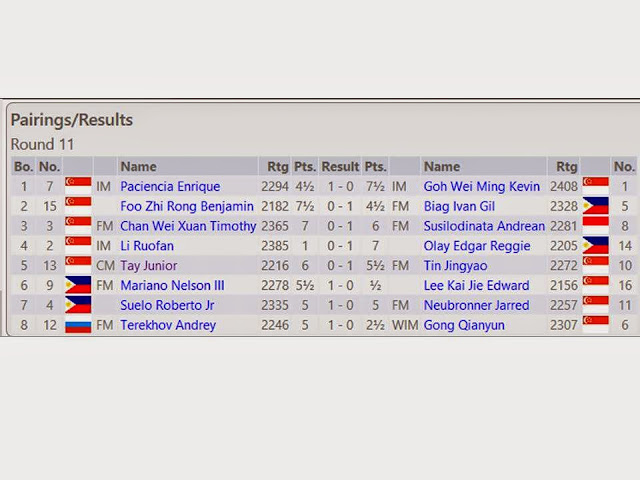 Round 11 - Pinoy Power!
By beating IM Li Ruofan, Reggie completed an incredible feat from Round 7 to 11, reeling off 5 consecutive wins to claim the 1st Singapore Blitz Masters title with 8/11! The day before the event, he had put on his facebook – “ No Tiger Beer day for me…A tournament to play in the ‘Anchor’age, so ‘Tiger’ moves first! (Nice puns eh?) And tiger-ish moves he played indeed as he strode to an impressive TPR 2464 performance and the $600 first prize. A brilliant self-birthday gift for him, as he celebrated his 39th birthday! 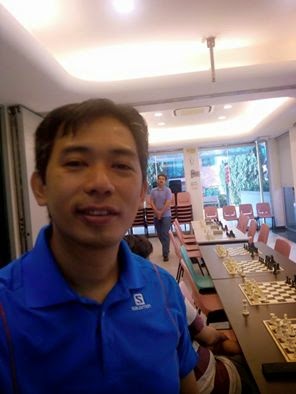 We also had Singapore’s strongest kibitzer in the audience, GM Zhang Zhong who was ever helpful with post-game comments and pointers on the games. What more can we ask for?

One final note is the adoption of the 3 minutes + 2 seconds time control used in the tourney. In the local blitz events, the 5 minutes sudden death time control is still used. Hence it is inevitable that in the dying seconds of the game, you will see clock banging, pieces flying and inevitably disputes as players try to beat the flag instead of the opponent. As a consequence, the arbiter might have to step in to settle disputes. With incremental time, most of these issues are eliminated and as evidenced by the tourney proceedings. Players resign when they are well and truly lost without playing till they get mated. A normal chess game lasts 30 to 60 moves and with 3 minutes+ 2 seconds time control, a game will usually last from 4 minutes to 6 minutes (per side), which is probably shorter than a 5+0 time control with the occasional board dispute.

So kudos to the organizers for a very well thought-out and smoothly run event!

More pictures from the event: 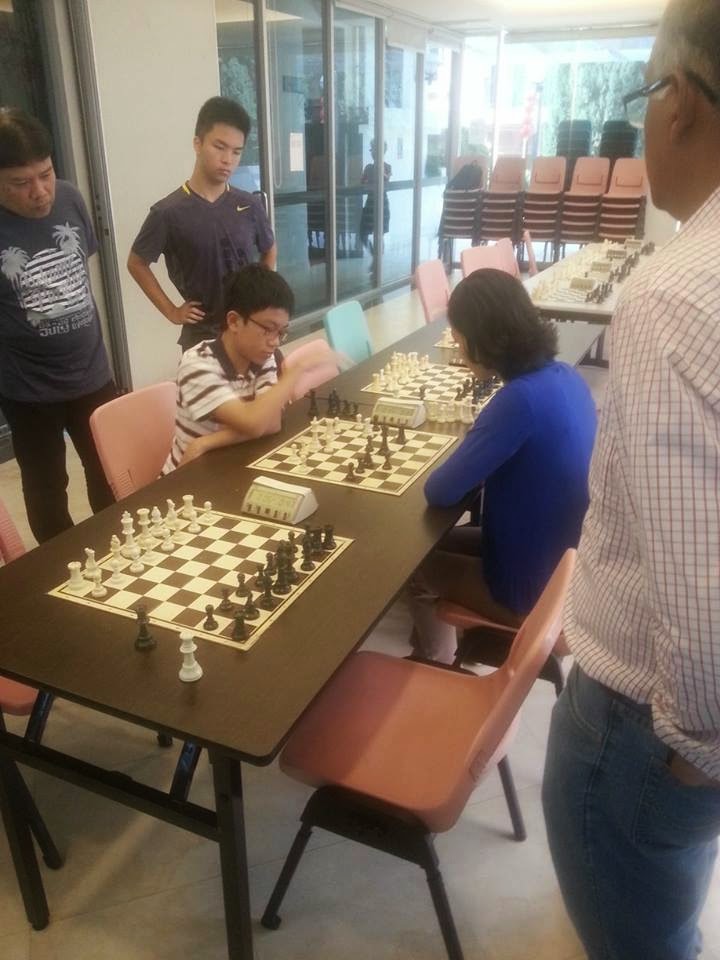 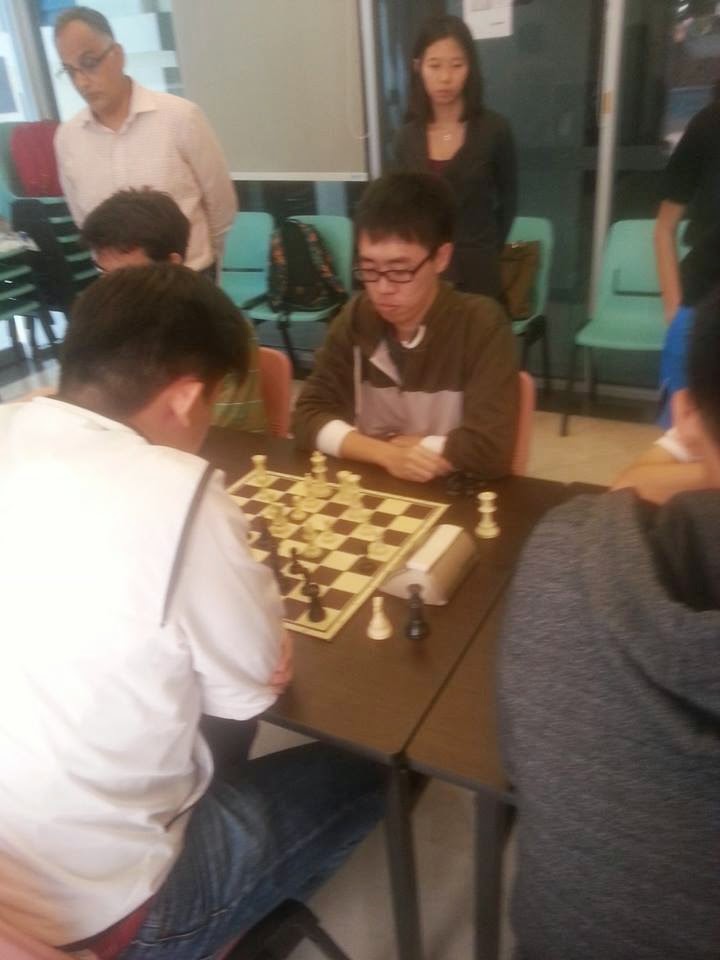 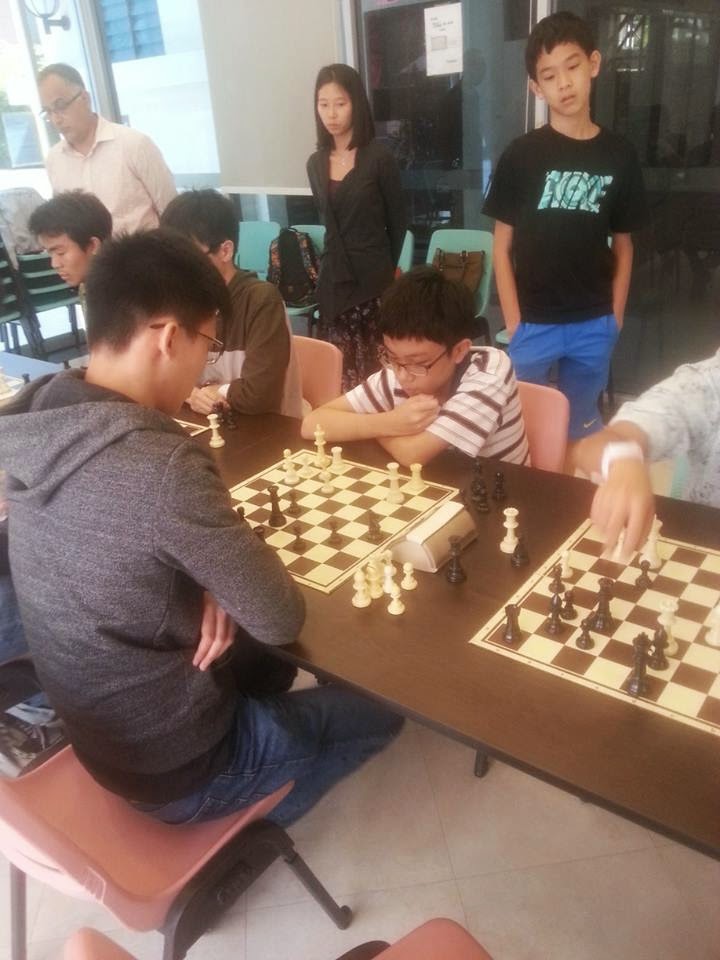 FM Timothy Chan shows that he is not that rusty after 2 years of absolute tournament inactivity as he upended Jingyao here. 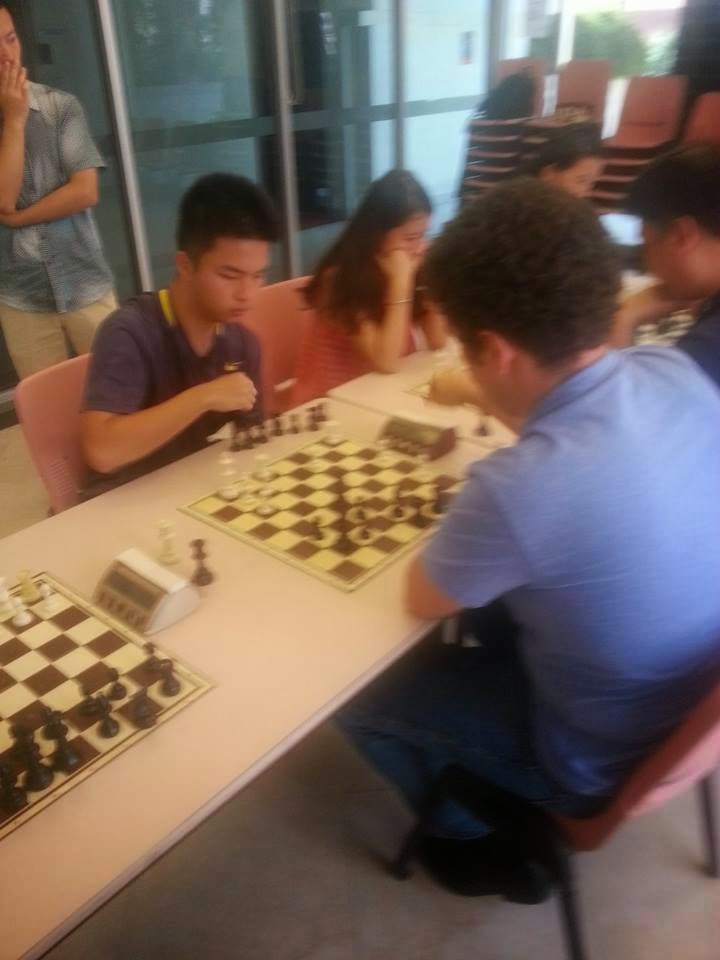 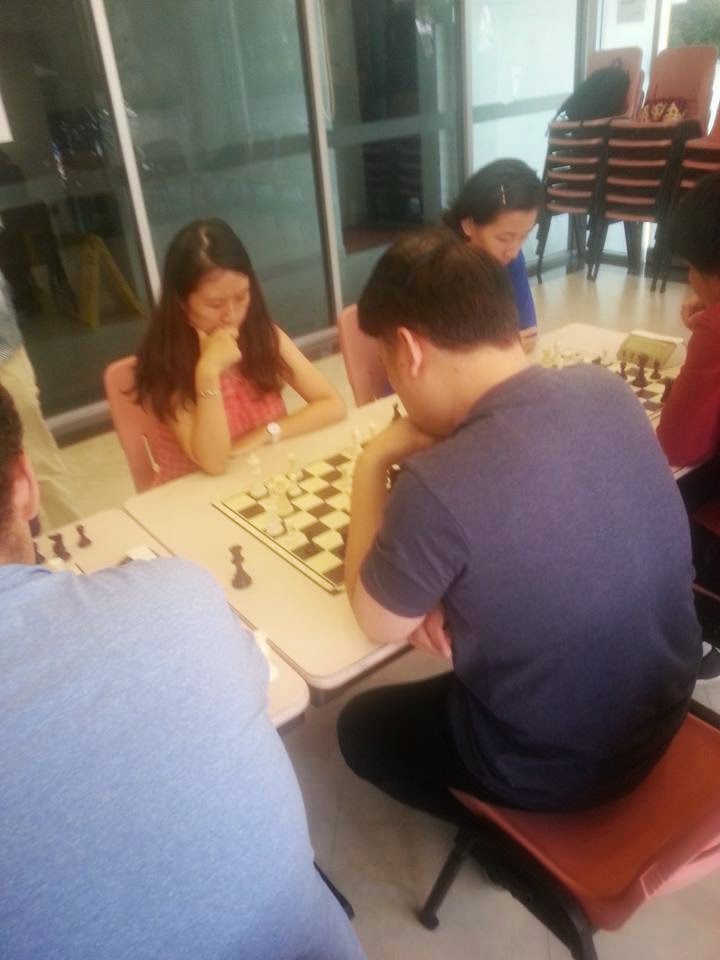 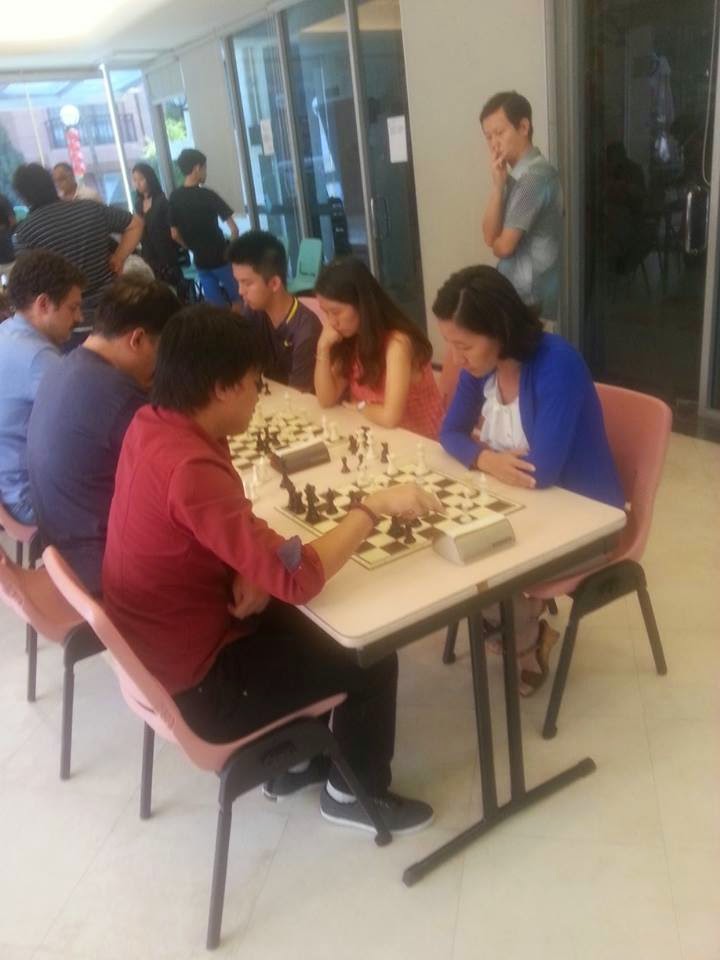 The strongest chess player in Singapore, GM Zhang Zhong, observing the proceedings and giving powerful kibitzing advice after the games.

Final Scoretable (Chess-results.com)
Check out a video from this event (courtesy of sgchess.net) and more on the youtube playlist!
Board 1 - Benjamin Foo vs IM Goh Wei Ming, Board 2 - Reggie Olay vs FM Timothy Chan

Games section (courtesy of Olimpiu Urcan)
Reggie offered Tim a poisoned pawn on c4 and the latter really grabbed it and a strange material situation resulted. The funny thing was that Reggie's subsequent plan of ransacking the Black queenside had a major flaw...his queen would get trapped there. Unfortunately for Tim, he missed the chance to shut the queen and Reggie's subsequent powerful queen play ended all discussion.

25 games from the event are available for download from the sgchess.net website
Posted by IM Kevin Goh at 22:46