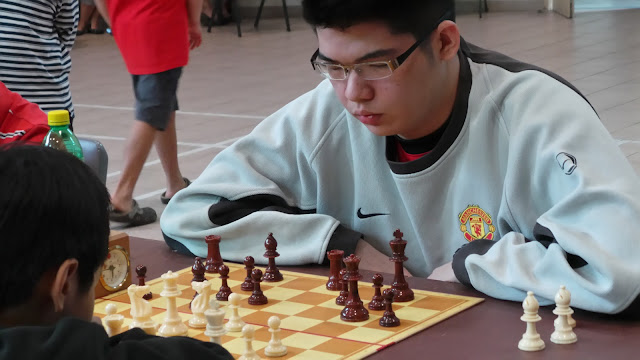 CM Tan Weiliang - thanks to sgchess.net for the pic!

A respite from the hazy conditions of the past few days allowed 55 chessplayers to contest in the Queenstown Club Championships. Shorn of the usual contingent of Pinoy masters typical of local tourneys, the tussle for the champion's title was a toss up between CM Tan Weiliang and NM Olimpiu Urcan in the final round.

Both of them did not have it easy though, dropping 1/2 point early. Weiliang was caught in the opening by Michael Siong in a Nh3, g3, Qb3 line in the Leningrad Dutch and after 11 moves, faced a worse position, having played too fast to notice its subtleties. Michael  made a practical draw offer to Weiliang and it was accepted. To be fair, I was also caught in the same opening in the final money round of the 2012 Cairnhill Blitz, lost two pawns and had to swindle my way out. Olimpiu, having worked his way into a winning King and pawn ending, mixed up the sequence in the forced win and had to settle for a draw against Marcus Chen, the National Age Group U8 champion. Much credit should be given to the youngster for his staunch defence!

Both of them continued to struggle in Round 6 with Weiliang barely flagging National Spelling Champion Ashvin Sivakumar on time in a complex ending. Olimpiu, on the other hand, had to hustle Reinhard Sellmair by going for dubious complications in the latter's time trouble. The 7th and final round showdown is covered in Olimpiu's sgchess.net blog.

Weiliang put up an incredible defensive display to outlast Olimpiu and retain his title, one point ahead of Ashvin Sivakumar, Olimpiu, young talent Heng Zheng Kai and Richard Lean. The final results can be seen on chess-results.

I would like to show you Weiliang's comprehensive win over Reinhard in Round 5. There are some mindboggling variations in the analysis provided - which didn't pan out in the game though.